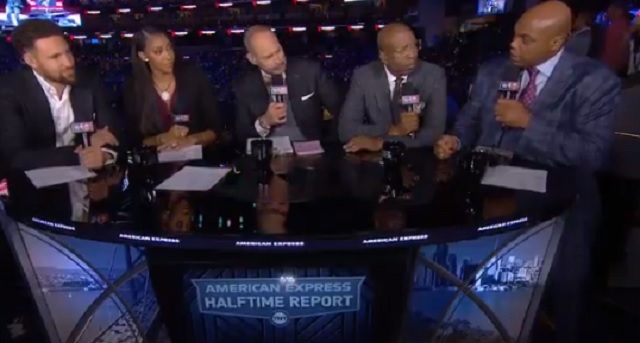 Charles Barkley has no filter and always tells it like it is.

Earlier this week, Warriors head coach Steve Kerr made news when he said it was “unlikely Klay Thompson” was going to play this season after tearing his ACL in the NBA Finals.

“It’s unlikely that he’s going to play this year,” Steve Kerr recently told NBC Sports Bay Area in an exclusive interview that aired Tuesday in “NBA Season Tip-Off,” only on the MyTeams app. “So we have to understand that

Kerr would later clarify his comments and stated that nothing was set in stone regarding Klay’s return.

“My comment was very matter of fact,” Kerr said following practice Tuesday afternoon. “ACL [injuries], generally they take nine to 12 months. Nine months takes us right until the end of the season.

“It’s really not news, it’s more reality. We’ll leave the door open and we’ll see what happens at the end of the year. But Klay is doing great.”

During halftime of tonight’s Warriors-Clippers game, Thompson sat down with TNT’s “Inside The NBA” crew to discuss his recovery. In the interview, Thompson backed Kerr’s comments and said he didn’t want to rush back because he believed the Warriors championship window is still open for “5-6 years’.

Why rush back for a sixth straight finals if I’m not 100 percent cause our window to win another championship is another 5-6 years.

After Klay made his comments, Charles Barkley interjected and told Thompson that he disagreed with his assessment about the Warriors’ championship window. Chuck also went on to proclaim that the Warriors would not make the playoffs this year.

I hope you get back soon but you’re just wrong. I think their window is shut. I don’t think they can score enough I want to make my prediction, Ernie. I said they were going to be the 7th-8th seed, they’re not going to make the playoffs because they just can’t score enough… When you look at your team, you say ‘OK, Steph can get me 30. D’Angelo [Russell] can get me 20. Draymond, even though he’s a heck of a player, he’s only going to get me 15.’ That’s not enough in the Western Conference. This year.”

Thompson kept his composure and tried to respond to Barkley’s pessimism.

I mean, Chuck has a right to be a little pessimistic, but I think these young guys are gonna step up, man,” Thompson said. “I did a shooting drill with Jordan Poole yesterday — he smoked me three out of five spots. Glenn Robinson has plenty of experience in this league. I really like what Marquese (Chriss) has given us this training camp. I think it’s exciting, man — I think we got enough guys to get us there, at least.”