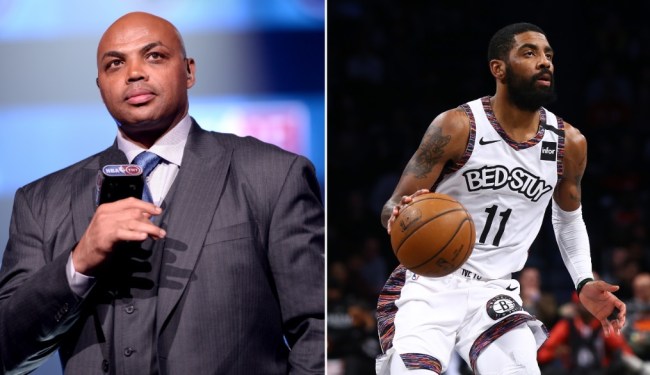 Charles Barkley does not seem to be a fan of Kyrie Irving’s media blackout, and he’s going to let him know about it.

Last week Kyrie avoided the media during the team’s media week and said released a statement that he doesn’t “talk to pawns.”

Kyrie Irving responds following being fined by the NBA for failure to comply with the league's media requirements. pic.twitter.com/WPgj3MPZXH

During an appearance on ESPN radio, TNT NBA analyst Charles Barkley ripped into Brooklyn’s point guard for not fulfilling his media obligations.

“I’m not sure what he’s doing. I don’t like it,” Barkley said. “You know, they don’t pay you $40 million dollars just to play basketball. Part of it is sitting down with you guys, sitting down with me and Kenny [Smith] and Ernie [Johnson] and [Shaquille O’Neal], talking to New York reporters. Talking with the media is part of your professional obligation. And you can say what you want to say. But these guys today, they’re different. I don’t hate on them, but I’m not sure what point Kyrie is trying to make.”

Barkley went on to take a shot at Irving for attempting to be the smartest person in the world despite the fact he only went to college for six months.

And when he talks I’m like, ‘What the hell is he trying…what is he saying and what is he trying to say?’” said Barkley. “He starts talking about what an artist is. He’s a basketball player. That’s what he is. Listen, we’re not…we’re not frontline responders. We’re not teachers. Yo man, you dribble a basketball, stop acting like you’re the smartest person in the world.

“Now can you talk about social issues and things like that? Of course. But some of this other stuff I’m like, ‘Yo man, you do realize you’re just a basketball player, right?’ And it seems like he’s like, ‘No I want you guys to realize I’m the smartest guy in the room.’ Well first of all, you’re not. You only went to college for six months. A lot of guys are smarter than you are. Just answer stupid basketball questions. And if you want to say something about social justice, say it and mean it, because it’s important and significant. But all that other stuff? Like, yo man, shut the hell up and talk basketball.”

After his initial media blackout, Irving has since spoken to reporters after getting fined $25k by the NBA.