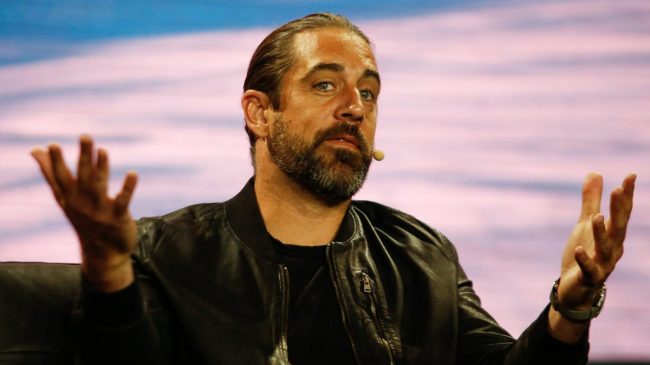 Aaron Rodgers has developed a certain look over the last few seasons.

After entering the NFL as a clean-cut rookie in 2005, we’ve seen a transformation to a mountain man-like look over the last two decades. Gone is the short hair and close shave. They’ve been replaced with long locks and a burly beard. There’s also the occasional mustache for effect.

Some love it. Some hate it. I don’t think it matters one way or the other to the reigning NFL MVP.

Still, many are quick to comment on the change in style, and that was the case in an interview earlier this week.

Rodgers sat down alongside Tom Brady to talk about The Match, an upcoming charity golf event that will air on TNT. He spoke with the NBA crew of Ernie Johnson, Charles Barkley, Kenny Smith, and Shaq about the tournament, where they’ll face off against NFL stars Patrick Mahomes and Josh Allen.

After ragging on his competition for a bit, Rodgers took a shot from Barkley about the ponytail he was sporting during the segment.

The segment starts off with the crew commenting on the looks of both Brady and Rodgers.

Charles Barkley says that Rodgers had that “wilderness look” going on, to which Shaq responds by asking to see his ponytail.

That’s when Barkley sounded off.

“A manbun? That’s not a thing. That’s called you’re too cheap to get a haircut, you can’t make it up something. Get a haircut, Aaron.”

It’s pretty funny coming from Chuck, who has no hair at all. I don’t think the comment will keep Rodgers from rocking the ponytail in the future. I’m betting we’ll see that grizzly look when the NFL opener rolls around in September.