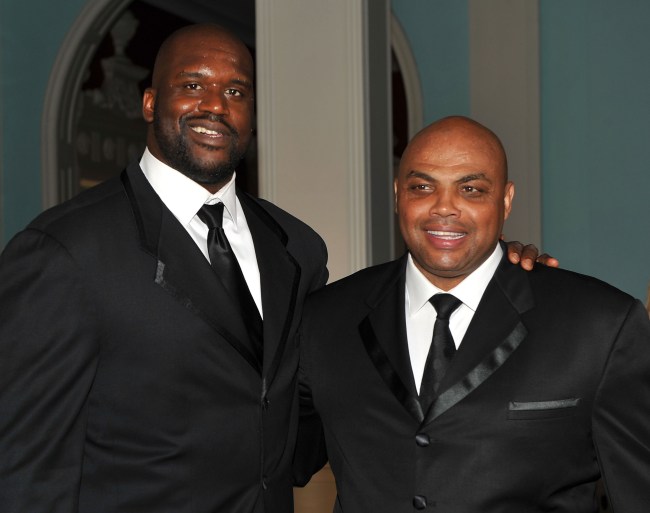 Charles Barkley and Shaquille O’Neal have had a feud that goes back to their playing days, as one infamous moment in NBA history proved that the two Hall of Famers loved to hate one another while competing on the hardwood. Most of us remember that incident pretty fondly — as it included Barkley chucking a ball at O’Neal head, which escalated into a full-blown brewhaha.

Fast-forward to the past couple of decades, and Shaq and Sir Charles have been poking at one another as TNT analysts, always providing hoops fans with some classic digs towards one another all in the name of entertainment. It’s like a big brother, little brother sort of relationship, which is mostly in good fun.

That said, Charles Barkley might want to watch his back the next time he sees Shaq in person, because, when listing his top-10 NBA players of all-time, Chuck actually left O’Neal’s name off of his list, as seen below. To say that it wasn’t well received would be an understatement, as fellow TNT analysts Ernie Johnson and Kenny Smith both gave Barkley shit for the exclusion. Take a look below at two videos showing the initial reactions; including Shaq’s.

Now, Charles Barkley seemed to backpedal a little bit when Kenny calls him out for not saying O’Neal’s name — and Sir Charles admits that he’s never seen anybody like Shaq — but he then doubles down by proclaiming he has the four-time NBA champ somewhere in the 11, 12 or 13 range behind guys like LeBron James, Kobe Bryant, Magic Johnson and Larry Bird.

That type of disrespect sure did piss Shaq off, which is where things got really good. Talking some shit back to Barkley, O’Neal threatens the Round Mound of Rebound by saying Chuck has two options: Either get a face full of his fist, or choose to strip down naked and jump into the lake behind him.

The Charles Barkley-Shaq feud is one of the best things ever. While it’s not something that will ever, truly come to blows — I mean, I don’t think…? — the fact that they know how to push one another’s buttons and still laugh it all off shows how great they are when together. In this instance, O’Neal’s got every right to be mad, man, because there’s no way in hell he isn’t a top-10 NBA player of all-time.