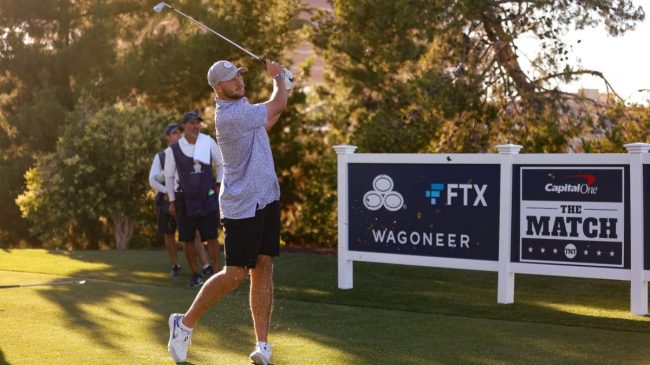 Charles Barkley is always primetime entertainment. Whether he’s reporting on the NBA, giving his thoughts on Auburn football, or talking about hockey, his opinions land the attention of sports fans nationwide.

So, when it was announced that the NBA on TNT crew would be calling The Match, the sports world was ecstatic.

The charity golf event, which saw quarterbacks Josh Allen and Patrick Mahomes face off against Tom Brady and Aaron Rodgers, took place on Wednesday night. An extremely competitive showdown, the NFL GOATs took down the young guns by a single stroke on the final hole.

While the golf was fun to watch in itself, the TNT broadcast was equally entertaining.

One moment in particular had viewers rolling in laughter with Barkley attempting to compliment rising star Josh Allen. Barkley’s choice of words, however, led to a hilarious reaction from the signal caller.

After sinking a putt, Barkley is heard paying a compliment to the Bills superstar about his abilities on the field, but he immediately regrets his choice of words.

He quickly tried to reword the statement once it left his mouth.

It’s a pleasure to watch you throw that thing, excuse me.”

Allen’s response is hilarious, as he was caught off guard by the statement.

While Allen lost to Brady and Rodgers on the course, he’s hoping to reverse the trend on the gridiron. Fans will be able to watch the passer sling it (or throw it, depending on your preference) in just a few short months as he hopes to lead Buffalo to their first Super Bowl win.