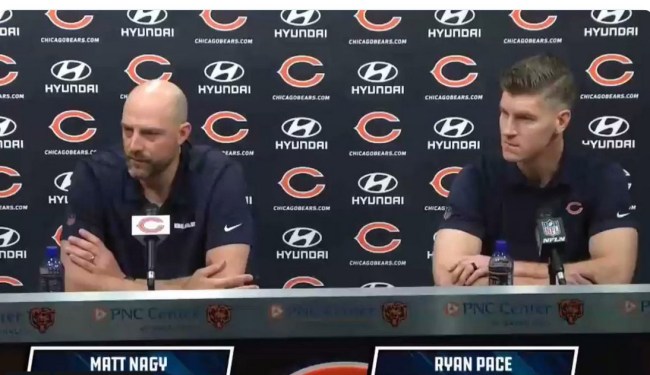 Chicago Bears kicker Cody Parkey, who missed three extra points and seven out of 30 field goal attempts (plus one you may have seen in the playoffs), will make around around $5 million to sit at home on his couch if the team decides they have had enough.

Based on the comments Bears head coach Matt Nagy and the team’s GM Ryan Pace made today in their review of the 2018 season, Parkey might just want to start couch shopping.

When discussing the kicking position, Pace told the assembled media, “We understand we need to get better, get more production out of that position. Matt talks about it all the time, there’s so much parity in our league, so many close games, the kicker position is critical. We know we need to get better there and it’ll be an area of focus,” then adding the team will be looking at other kickers during the offseason.

As for how Nagy feels right now about Parkey and more notably, what he thought of Parkey’s odd appearance on Today, the coach said, “We always talk about a ‘we’ and not a ‘me thing. We always talk as a team, we win as a team and lose as a team. I just didn’t necessarily think that was too much of a we thing.”

HOWEVER, a player that allegedly is guilty of far worse than missing some kicks, former Chiefs star running back Kareem Hunt… he is on the Bears’ radar.

Nagy, who was Hunt’s offensive coordinator in Kansas City during the running back’s rookie season in 2017, said he spoke to Hunt a week ago and “had a good conversation.”

“Me, personally, depending on certain people’s situations, I’m a guy that has always been [willing to give second chances],” said Nagy. “I’ve been kind of raised that way to give guys second chances.”

Bears GM Ryan Pace, for his part, at least tried to slow Nagy’s roll with regard to signing Hunt, saying, “We’re not even there yet. I know what [Hunt] is as a player, obviously, from watching him. Matt knows a little bit more about him as a person. But we’re not even close to that point.”