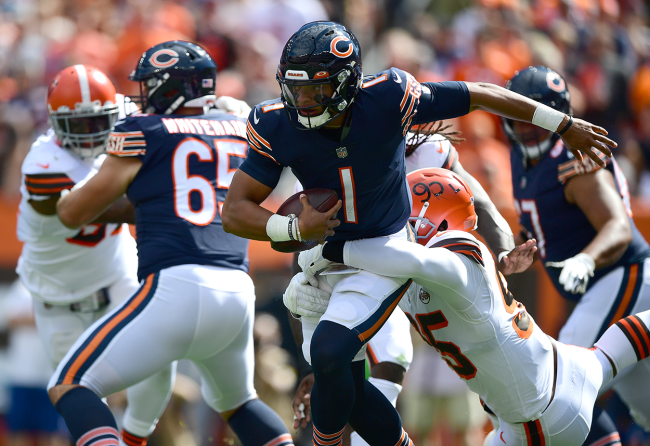 The Bears are committed to moving out of Chicago, but the city wants them to stay. It has resulted in a messy breakup that included a hilariously embarrassing oversight this week.

As things currently stand, the Bears have plans to move out to Arlington Heights. Moving to the suburb will allow the team to build a new stadium and capitalize on lucrative opportunities that are attached.

However, the city of Chicago does not want them to leave.

The city’s mayoral committee released a rough outline of renovations that it wants to make to the current Soldier Field and the surrounding area. It includes putting a dome on the stadium, a plan which was immediate mocked by NFL fans across the globe.

Included in the mock-ups was a glaring oversight. In the corner of one of the proposal images, a photo was displayed on a wall in the distance.

When you zoom in on the photo, it is actually a picture of Justin Fields getting sacked. The mock-up also includes a terrible photoshop of a Fields jersey in the foreground, alongside a woman wearing a Khalil Mack jersey. Mack is no longer on the Bears.

Nothing says “the city of Chicago wants the #Bears to stay” quite like showing Justin Fields getting sacked in their Soldier Field renovation mock-ups pic.twitter.com/aBSDBL9sqf

Although the embarrassing mocks were likely not the determining factor, the Bears are not biting on the city’s proposal.

The team said in a statement that it still plans to move to Arlington Heights.

“The only potential project the Chicago Bears are exploring for a new stadium development is Arlington Park,” according to a team spokesman via the Daily Herald. “As part of our mutual agreement with the seller of that property, we are not pursuing alternative stadium deals or sites, including renovations to Soldier Field, while we are under contract.”

Basically, the city is not going to keep the Bears in Chicago. They are set to move and it does not look like there is anything to change their mind. Showing their quarterback get sacked in the mock-ups probably didn’t help. Oops!