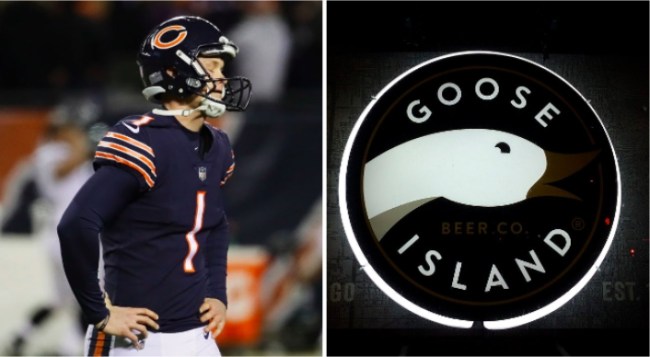 The NFL officially ruled Cody Parkey’s 43-yard missed field goal a block after footage revealed that Eagles’ defensive tackle Treyvon Hester tipped it at the line of scrimmage. Would Parkey’s kick sailed through the uprights if Hester hadn’t gotten a fingertip on it? No one can say. And there is not enough evidence to admonish the 26-year-old kicker from Scapegoat status. Every crushing loss needs a simplified explanation for healing purposes and the despair of the city of Chicago will rest on the right foot of Cody Parkey for the foreseeable future. Tough break.

One Chicago institution isn’t willing to join the rest of the city in piling it on Parkey.

Goose Island Brewery, headquartered in Chicago, Illinois, tweeted its support of the Bears kicker to its 80,000 followers by calling out the “armchair kickers” who are so quick to criticize Parkey. Goose Island took it even further by offering Chicagoans the opportunity to get drunk on their dime for free for a year if they can drill a field goal of equal length.

Check out the tweets below.

A lot of armchair kickers on here are saying that they could hit that field goal, which we find DOUBTFUL. You’re gonna sit there on your throne of potato chips and vape pens and criticize this dude’s athleticism? GET REAL. 2/5

*Rips JUUL* “You gotta problem with my pen bro?”

P.S. The problem with this logic is that the armchair kickers didn’t sign a 4-year, $15 million contract to make field goals. But I enjoy Goose Island beer so I’ll let it slide.

So you know what we’re going to do? Build a dang field goal post in the middle of the street outside of our brewery, and all you pro athletes can come out and prove us wrong. 3/5

This weekend during normal taproom hours we’ll have a chance for you to show off your kicking skills. Hit the 43 yard field goal and you’ll win beer for a year and eternal glory. More info coming soon. 4/5

Fuck the glory, give me the beer.

Pics or it’s not happening.

We’re dead serious, we have a drawing and construction begins tomorrow. pic.twitter.com/fOnsZihyy9

I fuck wit Goose Island beer. Anyone wanna pick me up in New York, drive me to Chicago, and watch me fail and disappoint my father? I’ll make a playlist and smoke cigs with the windows up. DM me.