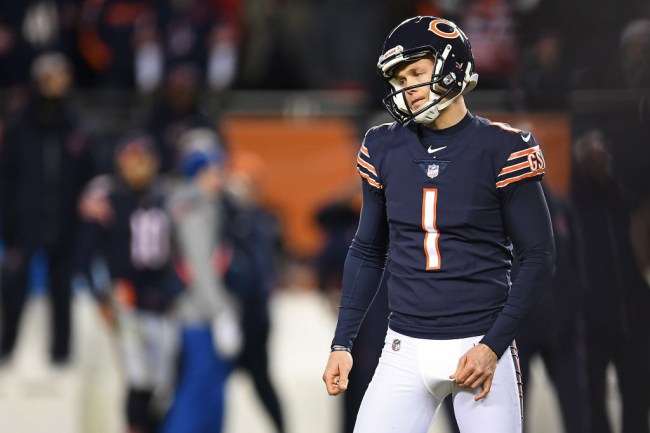 The Chicago Bears managed to secure a spot in the NFL playoffs for the first time in eight years this season and it looked like they had a good chance at advancing to the next round on Sunday, as they were in field goal range down by one with 10 seconds remaining in the game.

All eyes were on Cody Parkey as he lined up a 43-yard field goal that would have all but put the game away if he hadn’t managed to doink it off the uprights a couple of times.

Parkey had struggled a bit during the regular season, so while the field goal was far from a sure thing, that didn’t stop Bears fans from immediately making him Public Enemy No. 1.

Cody Parkey was boo’d (loudly) as he ran off the field. His $3.5M salary next season is fully guaranteed. pic.twitter.com/kxm67I8MZX

After the game, people flocked to Twitter and other corners of the internet to express their displeasure.

The best part about Cody Parkey effing up the change for the Bears to win tonight is the flood of people hacking into his Wikipedia page. pic.twitter.com/Rxifu6X5hI

Bears fans and the entire city of Chicago: pic.twitter.com/Xy5SUhpste

We also can’t forget the multiple people who gave the kicker the Nathan Peterman treatment and decided to set up GoFundMes to get Parkey out of Chicago.

Thankfully, Kobe Bryant had his back.

We’ve all been here Cody but if you wanna win back the city you gotta get back in the lab and have a historic season next year to bury this one. I’m happy for my #EaglesNation but as a fellow pro athlete you gotta grind harder and double down #noexcuses #JGSD justgetsh*tdone https://t.co/icd3MQRQFg

Parkey has had to deal with more shit over the past day than a guy who empties porta-potties for a living will over the course of his career, but in a major twist, it turns out it his miss wasn’t actually a miss at all.

Following the game, footage was released that showed Parkey’s kick might have actually been blocked at the line of scrimmage.

Treyvon Hester claimed he got his fingers on the ball and it appears the NFL agrees, as they officially credited the defensive tackle with a block on the play.

The ruling might not cancel out the infinite amount of abuse hurled Parkey’s way over the past 24 hours but I hope he can at least take a little bit of solace in the stat change.