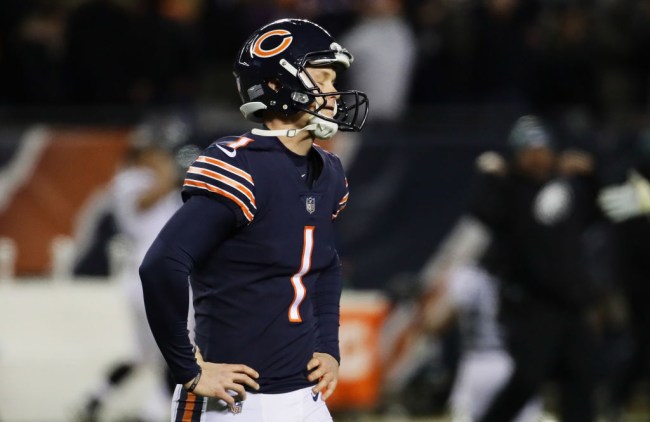 The Chicago Bears entered the 2018 NFL offseason facing a bit of a crisis when it came to finding a competent kicker and decided to put their faith into Cody Parkey, who didn’t exactly have the smoothest of seasons.

During last night’s playoff game against the Eagles, the Bears were within field goal range down by one with 10 seconds left in the fourth and Parkey was called upon to help try to seal the deal with a 43-foot kick.

Unfortunately, he hit the uprights yet again. Twice

It was a heartbreaking defeat for the Bears, who had managed to clinch their first playoff berth since 2010.

I’ve never been a huge fan of condemning kickers for losing a game by missing a last-second field goal, as you usually have to lay some blame on the rest of the team for putting them in that position in the first place.

However, Parkey manned up and said he took full responsibility for the loss.

Parkey became an easy target for Bears fans and people quickly flocked to Wikipedia to pour some salt into his fresh wounds.

I see Twitter is being calm about the end of the #PHIvsCHI game. Here's Cody Parkey's Wikipedia entry (gone now). pic.twitter.com/HxstpytJkL

However, they didn’t stop there, as Parkey has now officially been given the Nathan Petermen treatment in the form of some crowdfunding campaigns.

According to Total Pro Sports, multiple GoFundMes have bee created by people who want to help the kicker retire early or simply buy him a plane ticket out of Chicago.

I can understand why Bears fans are pissed at Parkey, who by most accounts didn’t have the best season; he was the 28th most accurate kicker in the league with a field goal percentage of 76.7 (for comparison, Robbie Gould took the top spot at 97.1% and only missed a single attempt out of 34).

I totally get that the GoFundMes aren’t meant to be taken super seriously and I’ll admit they’re actually pretty entertaining.

However, they’re a bit futile when you consider there’s virtually no chance Parkey will be with the Bears next season and I’d also argue he doesn’t really deserve to be dragged as much as he has based on his classy response to the missed kick following the game.

Unfortunately, the haters will always hate.