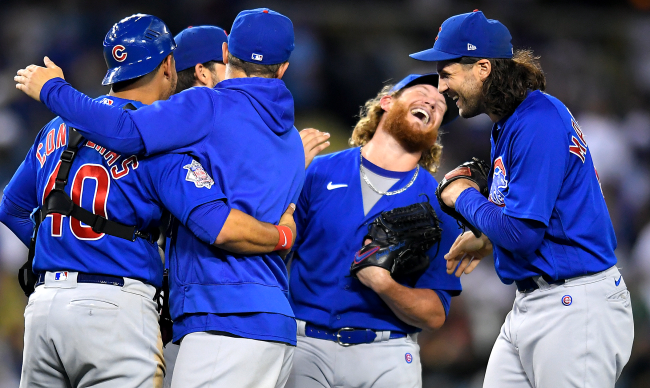 Four Chicago Cubs pitchers made history Thursday night when they combined for the first combined no-hitter in the franchise’s 145 year history.

Starter Zach Davies and Cubs relievers Ryan Tepera, Andrew Chafin and Craig Kimbrel all shut down the Los Angeles Dodgers in a 4-0 win for the 17th no-hitter in team history.

Davies, however, was the only pitcher that was aware that it was even a possibility while he was on the mound, reports the Chicago Tribune.

Tepera, Chaffin and Kimbrel all had no idea they were pitching a no-hitter until after they left the game.

“The whole bullpen had no idea,” Chafin said after the game. “It was completely oblivious.”

“I had no idea until after my inning,” said Tepera.

“I had no clue when I came into the game,” said Kimbrel.

Chafin said he didn’t realize what was happening until he noticed the TV broadcast in the clubhouse after the eighth inning.

“Wait a second, why would they be showing that stat at this point in the game?” Chaffin said after the game. “Oh, sh-t, I might’ve just ruined it for us.”

Kimbrel didn’t find out what was going on until he struck out Dodgers pinch hitter Will Smith to end the game.

“When Willy (Contreras) gave a big fist pump, I knew something was up, Then Tep ran out there and whispered in my ear, ‘You have no idea what happened,’ and then Javy (Báez) put me in a headlock — I knew pretty fast what had just happened,” said Kimbrel.

Kimbrel and Chaffin said the limited view from the bullpen combined with the fact that the Dodgers did have baserunners during the game (the Cubs allowed eight walks) is why they didn’t realize what was happening.

“In our defense, from that bullpen, our perspective on the field, all we can see is like batting averages and the count and stuff like that,” said Chaffin.

When asked if things might have turned out differently had the Cubs relievers had known they were in a no-hitter bid, Chafin said, “It wouldn’t have mattered. I would have thrown the same stuff anyways.”

Tepera, on the other hand, admitted, “Yeah, it probably worked out for the best.”

"I'm not gonna lie, I had no idea until the last out."