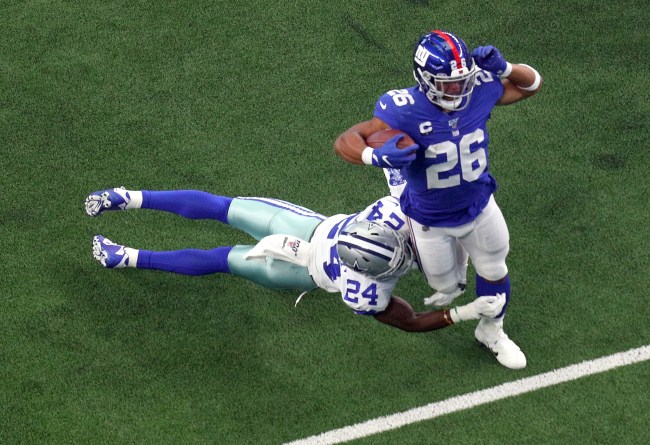 It took Saquon Barkley a grand total of one play to bust out.

The Giants running back broke free for a 59-yard gain on the second play of the Giants 35-17 loss to the Cowboys. According to ESPN NFL Nation reporter Jordan Raanan, Barkley hit top speeds of 21.76 mph on the carry, making him the fastest ball carrier this week.

59-yard gain on the second play for the @Giants! #NYGvsDAL

Turns out, Saquon was just the second most impressive player on the play, as Cowboys CB Chidobe Awuzie miraculously tracked him down by running at a speed of 22.81 mph, the fastest a player has been recorded since 2017.

The angle from top-down is wild.

Holy fast. Check out Cowboys CB Chidobe Awuzie track down Saquon Barkley on this play. Barkley couldn't believe it. Awuzie hit 22.81 mph, per Next Gen Stats. That's the fastest a player has been recorded since 2017.

The University of Colorado product ran a 4.43 40-yard dash in the 2017 combine, which is fast, but not ‘Catching Saquon Barkley In The Open Field Fast. So the NFL, like the tone deaf entity it is, decided to immediately hit the 24-year-old with a PED test.

That’s why I got PED tested yesterday smh

God, imagine hit ego hit that must be. You just give a wonderful presentation to clients. You’re so proud of your performance. And then your boss, who has limited expectations of you, asks you to piss in a cup.

Chidobe Awuzie deserves an Edible Arrangements from the NFL and Roger Goodell should be required to spell his name out loud on national television.