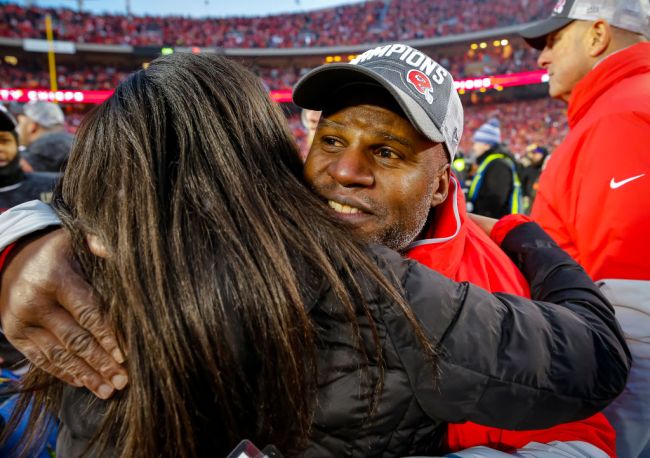 Eric Bieniemy continues to be one of the best people in professional sports. There was a lot of uncertainty as to the fate of the 2020/21 NFL season, but the league pushed forward and completed its 17-game regular season with the Super Bowl in Tampa Bay. On the losing end of the big game, Kansas City’s offensive coordinator had one of the more unique seasons and gave up a lot of things we take for granted to stand by his team every Sunday.

From the summer of 2020, when teams were allowed to return to practice, through the final whistle of the Super Bowl, Bieniemy spent the season living in a hotel to protect his son. Eric III has cerebral palsy and respiratory issues that put him in the highest-risk group among those who could contract the coronavirus.

Here are the details of his living situation, per Sports Illustrated’s Jenny Vrentas:

Chiefs offensive coordinator Eric Bieniemy lived in a hotel from July 23 through the Super Bowl to isolate from his wife, Mia, and their two sons. Bieniemy’s older son, Eric III, has cerebral palsy and respiratory issues, making the 26-year-old high risk for contracting COVID-19. To keep him safe, Bieniemy made this private sacrifice for the entirety of the 2020 season: He would stay in a hotel six nights out of the week and only return home on Fridays—but wearing double masks, keeping a distance and sleeping in the basement.

“It’s been this way for the past six months,” Bieniemy said before Super Bowl LV. “It’s been a challenge.” The lonely nights were a stark contrast from how 2020 began, with Eric III’s wheelchair parked on a platform inside Hard Rock Stadium in Miami, whispering play-by-play in his ear as the Chiefs fought their way to a Super Bowl championship.

There has not been a single report about Bieniemy that doesn’t speak to what a good man he is and how hard he works for his job. This new story just continues to show what the game means to him and why the players, coaches, and his family love him. And the fact that he didn’t let anyone outside of his circles know what he was doing for his son speaks to his humility. How can you root against this guy?

Hopefully, things will be different when next season begins and Eric III can be amongst those in the stands as his father tries to lead Kansas City to its third consecutive Super Bowl appearance.