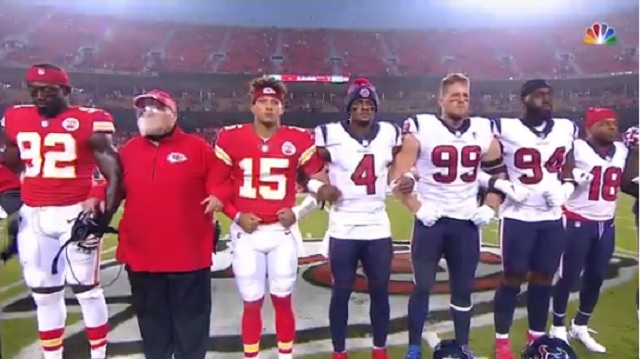 Chiefs and Texans players wanted to do something special for the first game of the season to show that players were united but fans in attendance weren’t feeling it.

Before Thursday night’s Chiefs-Texans game, players on both teams locked arms in the middle of the field for a brief “moment of unity.”

The Chiefs and Texans stood together in a moment of unity, dedicated to the fight for equality before the season opener. pic.twitter.com/CUmUW4z2xp

The limited amount of Chiefs fans who were allowed to attend the game could be heard booing the players locking arms.

Chiefs fans just boo’d the “Moment Of Unity.” These were the messages put on the scoreboard #NFLKickoff pic.twitter.com/gHoDcdILs7

It’s going to be a long season.