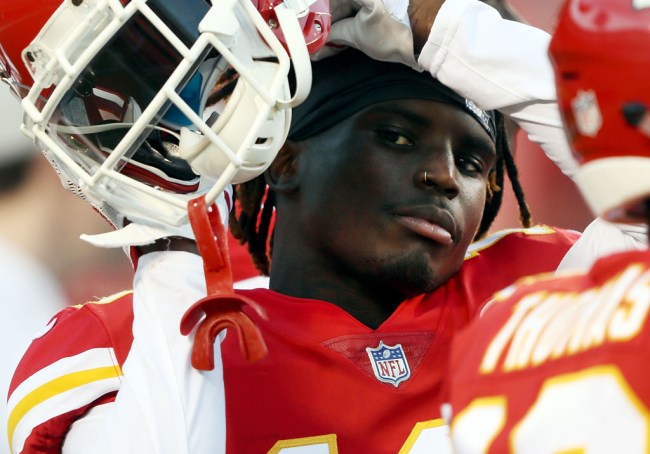 Over the course of his three seasons in the NFL, Tyreek Hill has established himself as one of the best wide receivers in the league and has only had a chance to do so because the Kansas City Chiefs have been more than willing to overlook the fact that he is, by most accounts, a giant piece of shit.

In 2014, Oklahoma State made the easy decision to kick Hill out of the program after he was arrested for brutally assaulting his pregnant girlfriend. He was sentenced to three years of probation and would eventually find a new home at the morally ambivalent University of West Alabama and managed to stay out of trouble long enough to have his record expunged.

Last month, Hill found himself at the center of yet another investigation after his three-year-old son ended up with a broken arm following an alleged battery incident in his home.

Tyreek Hill under investigation for allegations of battery, per KC Star.

Chiefs: “The club is aware of the investigation. We’re in the process of gathering information and have been in contact with the league and local authorities. We’ll have no further comment at this time.”

He and his fianceé Crystal Espinal—the same woman he attacked five years ago—temporarily lost custody of their child as police looked into the matter, but earlier this week, the district attorney overseeing the case announced law enforcement hadn’t gathered enough evidence to file any charges.

On Thursday, KCTV5 dropped a bombshell after it released a recording it obtained of Hill and Espinal discussing the incident in which Hill appears to live up to his reputation as a piece of human garbage by making a number of disturbing comments.

We'll have much more audio on our 10PM newscast tonight.

The discussion was apparently recorded by Espinal as an “insurance policy,” and if you can’t listen to it yourself, here are some of the most notable excerpts via TMZ:

Crystal Espinal: “He is terrified of you. And you say that he respects you, but it’s not respect.”

Tyreek Hill: “He respects me.”

Crystal Espinal: “He is terrified of you.”

Tyreek Hill: “You need to be terrified of me, too, bitch. That’s why you can’t keep a f*cking man.”

Crystal Espinal: “He started crying & you were like, ‘Shut up, shut up, stop crying, stop crying.'”

Crystal Espinal: “And then he kept crying because he was scared. He’s terrified. You grabbed onto him somehow or he fell? 1 of the 2.”

Tyreek Hill: “I didn’t do nothing.”

Tyreek Hill: “He says Daddy does a lot of things.”

Crystal Espinal: “A 3-year-old is not going to lie about what happened to his arm.”

After being made aware of the recording’s existence, the Chiefs issued a statement and announced they were immediately suspending Hill from the team.

Hill released a statement of his own and, well, I’ll let you decide for yourself how truthful you think it is.

Statement from Tyreek Hill through his attorneys regarding the investigation:

“I love and support my family above anything. My son’s health and happiness is my number one priority.” pic.twitter.com/jDcAVG6Wy7

In a perfect world, Hill’s career would be over but given the NFL’s stellar track record concerning instances like these, I’m not going to hold my breath.