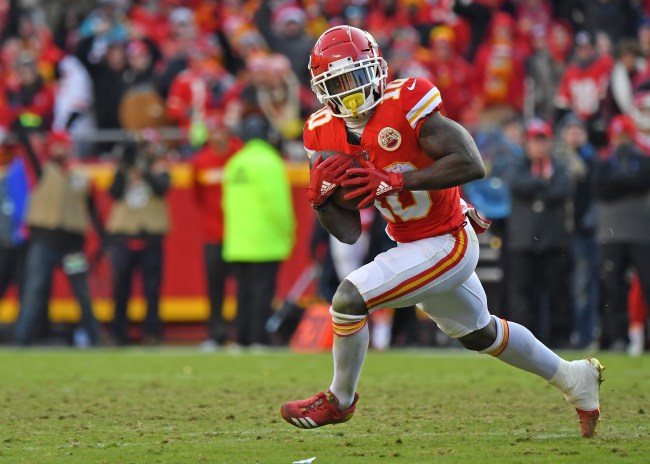 Tyreek Hill was one of the most explosive players in the NFL last season, which helped the Kansas City Chiefs finish with the best record in the AFC and led to the wide receiver making the Pro Bowl. Unfortunately, following the season, Tyreek Hill was involved in a domestic dispute that led to he and his fiance, Crystal Espinal, losing custody of their sone after a pair of incidents occurred at their home.

The two incidents, which were dated on March 5 and March 14, showed that the first report was listed as a child abuse/neglect case, with the second report listed as a battery incident in which the only victim Hill’s three-year-old son, who, unfortunately, suffered a broken arm. While it’s clear something happened, the District Attorney for the case, Stephen Howe, didn’t have enough evidence to support any charges, and decided that none will be filed against Tyreek Hill or his fiance.

District Attorney announced he will not file charges in the investigation against Chiefs’ WR Tyreek Hill. A crime has occurred but no conclusive evidence as to who committed it.

Although there will not be any formal charges against Tyreek Hill nor his fiance, the D.A., Howe, did say that the child protection case is still ongoing, per USA Today. Howe also voiced his concern over the incident which left Hill’s son hurt.

“We are deeply troubled by the situation and are concerned about the health and welfare of the child in question,” Howe said. “We believe that a crime has occurred. However, the evidence in this case does not conclusively establish who committed this crime.”

Howe said that the criminal investigation has concluded, but the child protection case is ongoing.

“Oh absolutely,” Howe said when asked if he was frustrated he couldn’t file charges. “The child has been hurt. So, yes, as a prosecutor, as a father of four kids, yes. It frustrates me when someone hurts a child and you can’t do anything about it.”

Tryeek Hill had a breakout season for the Chiefs last year, totaling 1,479 receiving yards with 87 catches and 12 touchdowns. He also added a rushing score and one punt return touchdown.