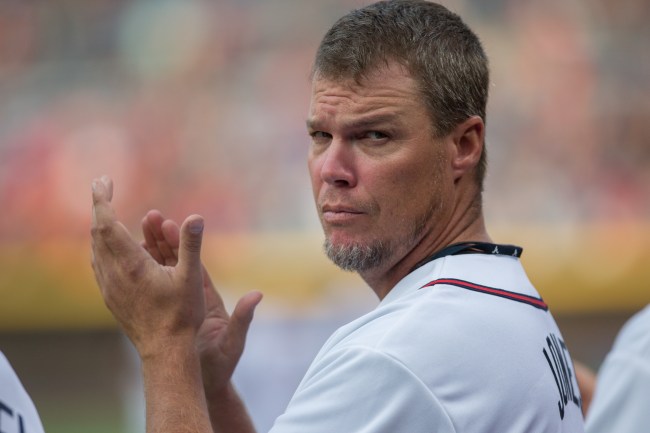 Atlanta Braves hall of fame third baseman Chipper Jones is not pleased with MLB players holding out over money right now considering people all over the country are struggling to pay their bills.

For the past few weeks, the players union has been negotiating and pushing back against the MLB over a 50/50 revenue split to get the delayed season back on track.

Rays pitcher Blake Snell explained that he was unwilling to take the revenue split which would see him getting paid a fraction of his salary.

Y’all gotta understand, man, for me to go — for me to take a pay cut is not happening, because the risk is through the roof,”

“No, I gotta get my money. I’m not playing unless I get mine, OK? And that’s just the way it is for me. Like, I’m sorry you guys think differently, but the risk is way the hell higher and the amount of money I’m making is way lower. Why would I think about doing that?”

“Bro, I’m risking my life,” Snell said. “What do you mean it should not be a thing? It should 100% be a thing. If I’m gonna play, I should be getting the money I signed to be getting paid. I should not be getting half of what I’m getting paid because the season’s cut in half, on top of a 33% cut of the half that’s already there — so I’m really getting, like, 25%.

“On top of that, it’s getting taxed. So imagine how much I’m actually making to play, you know what I’m saying?”

On Thursday, Jones spoke to the Athletic and absolutely ripped the players union to shreds for holding out and “bitching” about money during a global pandemic that has resulted in extremely high unemployment rates.

"The 30 million people in America that are out of work right now…don’t want to hear about millionaire baseball players bitching because they’re only going to get 25 or 30 percent of their salary this year. They don't want to hear that." — Chipper Joneshttps://t.co/AuVRbmBfoL

Jones also specifically called out Blake Snell over his comments.

“Blake Snell came out last week and, as a former player, it was not a great look for the players,” . “I think if he would’ve stuck to the narrative of the health issues and his concerns over that as opposed to ‘I’m not gonna play because I’m not gonna get my money,’ that was a little bit of a bad look.

“I’m still hopeful that we can get something started the first week of July, July 4th, something like that, 80-90 ballgames by October and a strong postseason. This season’s always gonna have an asterisk by it, but the bottom line is the American people clamor for baseball on TV whether fans are present or not.”

Thankfully it seems both the MLB and the MLBPA are willing to compromise on salaries to get the season started again.

Players would defer their prorated salaries to future years to reduce owner expenses in 2020.

Both showing a willingness to negotiate and get a deal done. They want baseball.