8th Grader Chris Henry Jr, Who Was Adopted By Pacman Jones, Has Received An Offer From The Ohio State University 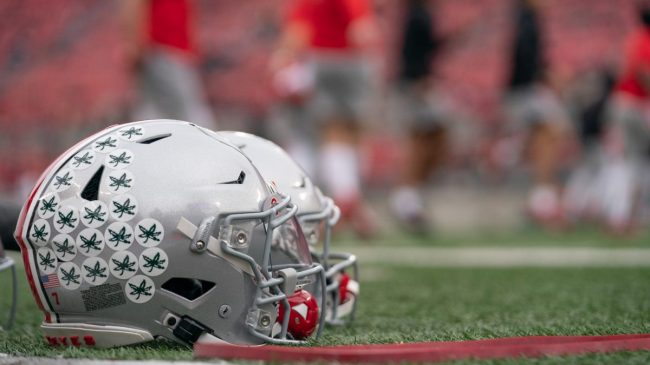 The Ohio State football program has offered an eighth grader.

Chris Henry Jr., a class of 2026 wide receiver from Cincinnati, picked up a scholarship offer from the Buckeyes following a trip to Columbus over the weekend. The youngster posted the official announcement on his social media accounts Monday.

With Henry yet to have reached the high school ranks, he doesn’t yet have a rating on the recruiting sites. Still, you can imagine he’ll be one of the top players in the ’26 cycle given his already growing list of interested schools.

If you haven’t already picked up on it, Henry is the son of late NFL wideout Chris Henry. The elder Henry played for the Cincinnati Bengals 2005 and 2009 before his unfortunate death. Following the passing of his father, the younger Henry was adopted by former Bengal teammate Pacman Jones.

.@REALPACMAN24 tears up while talking about adopting Chris Henry’s kids:

“We love each other hard. We cry together, we pray together, we do everything together. We all family.” pic.twitter.com/nywSiFdGhv

Jones adopted both Chris and his brother following the death of his best friend. Now, he’s able to watch Henry follow in his father’s footsteps by landing a D1 offer from a major program.

Amazing part of this story is Pacman Jones adopted and has been raising him and his brother. https://t.co/xDxj8rRNMG

News of the story has taken social media by storm.

Many are reminded of Chris Henry, Sr. with the news of the offer.

Others note Henry’s unbelievable playmaking ability at such a young age.

Was really impressed watching Chris Henry Jr. this afternoon. His speed and playmaking ability stood out among the wide receivers. Did not look like someone going into his freshman year of high school.

Henry appears to possess a perfect blend of speed and size, and he could be on his way to a big collegiate career. Of course, that will come after his high school playing days are through.

It will be interesting to see if he winds up choosing the Buckeyes in the recruiting process. He’s also getting interest from his father’s alma mater, West Virginia, which could give them a leg up in the race.

That decision likely won’t come for some time as Henry is probably more excited about starting high school as opposed to his college future.