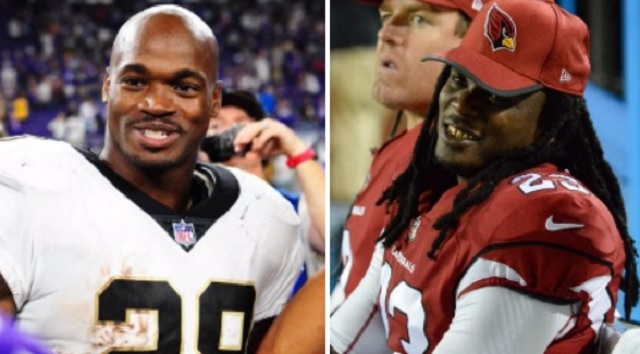 During week 1 of the NFL season, Adrian Peterson got into it with Saints head coach Sean Payton for not using him enough during the game. Peterson’s lack of touches with the Saints led to Cardinals running back Chris Johnson sending out this tweet supporting AP.

4 weeks later and Adrian Peterson is gone from the Saints and has now been traded to the Arizona Cardinals.

Confirmed: Saints have indeed traded Adrian Peterson to the Cardinals. Chris Johnson and Peterson are teammates. For now.

Unfortunately for veteran running back Chris Johnson he had to get cut to free up a roster spot for Peterson.

Of course everyone had to remind him about his “AP needs more touches tweet”.

Big trade for the @AZCardinals 2012 is their year. pic.twitter.com/FPyEsaGx7b

THIS MAN CHRIS JOHNSON SAID "AP NEEDED MORE TOUCHES" AND THE CARDINALS SAID "YOU RIGHT PACK UP AND LEAVE SO WE CAN GET HIM" LOLOLOLOLOLOL pic.twitter.com/Z9MbaLw6CF

This you when you hop on twitter today pic.twitter.com/3QMjuJezG5