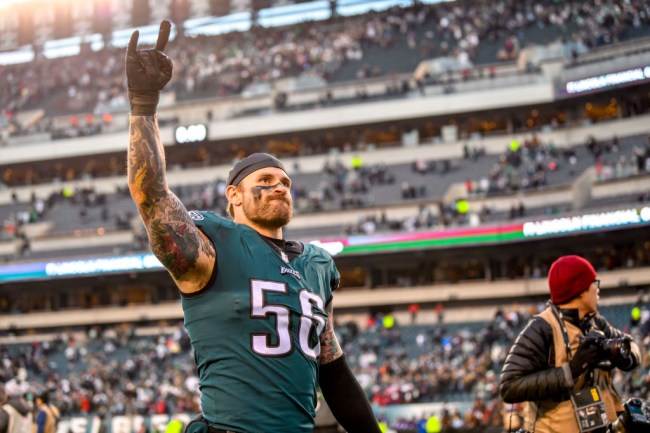 Carson Wentz suffered what looked to be a pretty brutal head injury during the Eagles’ Wild Card matchup with the Seahawks on Sunday. It was bad enough that he left the game and never returned, but that didn’t keep at least a couple of media members questioning his durability as an NFL quarterback.

As Wentz fell to the ground in the first quarter, Jadeveon Clowney followed him to the ground, head first, causing his head to hit the turf with some serious impact.

The Carson Wentz head injury happened on this hit by Jadeveon Clowney pic.twitter.com/08VrYddOTV

Philadelphia going about things without its starting quarterback isn’t anything new with Wentz’s injury history, so some reacted to the brutal hit to the head like any other injury even claiming that he may not be ‘built for the NFL.’

Chris Long, a former teammate of Wentz, didn’t like the fact that people were questioning the quarterback after the injury and let them have it on Twitter.

His brain unavoidably collided w his skull on a dirty hit… with no concussion history I’m aware of. Yeah… Had it been a pulled hamstring or a slipped disc, you could justifiably identify a pattern and your point wouldn’t be so dogshit. https://t.co/cK7qAglKrx

Long’s argument with Kanell here is spot-on, it’s not like Wentz pulled a hamstring or something; a very large human fell on top of his head helmet first slamming his skull into the ground.

Kanell wasn’t the only one that caught the Twitter hands from Long on Sunday night.

Torry Holt replied to one of Anderson’s tweets about the injury claiming that it’s ‘always something with Wentz’ and the ESPN reporter decided to quote tweet it saying ‘I hear you Torry.’

Again, the man got his head smashed into the turf, he didn’t break a toe by kicking a bench or roll an ankle or something, it was a brutal hit to the dome.