Hall Of Famers Chris Mullin And Mitch Richmond, Both In Their 50s, Can Still Outshoot Pretty Much Everybody 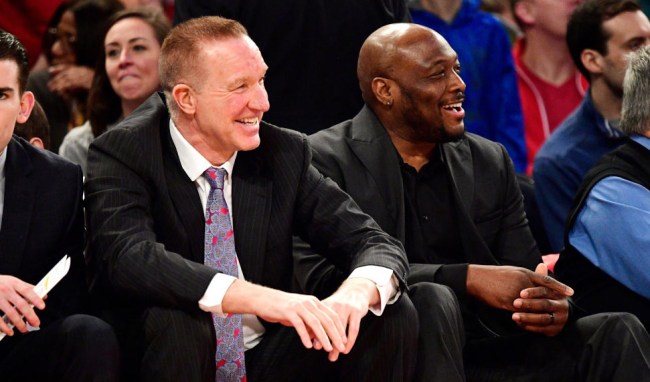 Basketball Hall of Famers Chris Mullin and Mitch Richmond, both in their 50s, showed at a recent St. John’s practice that they are still better shooters than pretty much everyone.

Mullin, 55, St. John’s alumnus and current head coach, and Richmond, 53, Mullins one-time teammate on the Warriors and St. John’s assistant coach, retired from the NBA way back in 2001 and 2002, respectively.

However, you never would have known it by the shooting display the former members of the legendary trio “Run TMC” (along with Tim Hardaway), who drained an eye-popping 32 out of 40 (80 percent) attempts from behind the college three-point arc.

Just in case you are looking for a couple of shooters, Chris Mullin and Mitch Richmond are still free agents. HOFers don’t miss #SJUBB 🔴⚪️🗽 pic.twitter.com/WF5n1mJZy9

Can you imagine being one of the players on St. John’s these days? How could you possibly argue with anything they tell you to do on the court?

And then you’ve got Richmond, another Hall of Famer who scored 1,327 points – the most by a college player in a two-year career, a former NBA Rookie of the Year, six-time NBA All-Star, and a 2002 NBA Champion.

Are you going to argue with them if you play for the Storm? Especially when they can still shoot the lights out?