No, Kanye West Did Not Catch Chris Paul Sleeping With Kim Kardashian According To New Report 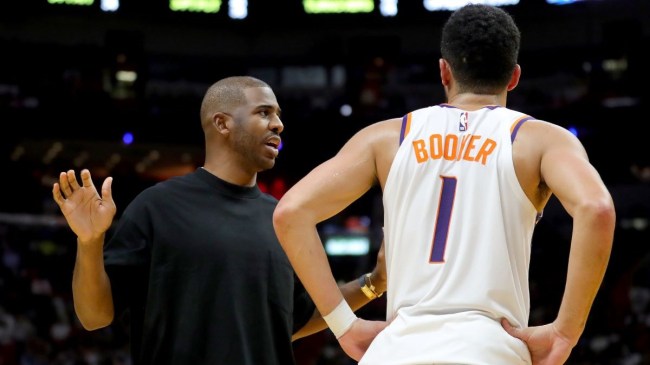 In case you, like most normal human beings, were asleep as Kanye West went on yet another ridiculous social media rant on Thursday night, you may have missed quite the story.

When West wasn’t peddling antisemitism and unabashed Nazism, he was once again focusing his ire on his ex-wife, Kim Kardashian. This time, however, West appeared to implicate a massive star in the sports world. The formerly talented rapper turned egomaniac claimed that he caught Phoenix Suns point guard Chris Paul with his then-wife.

It was quite the bombshell and unsurprisingly set the internet on fire with both jokes and some serious questions. But there’s only one problem. It reportedly isn’t true.

The veracity of anything that West says these days should immediately come into question. But this claim, in particular, seemed dubious from the star.

Now, according to TMZ, it’s been downright disproven.

A source close to the situation tells us the allegation is absolutely false, and just another example of a desperate man trying to shift the focus away from his own wrongdoings.

The source says, “This is not true and sadly it’s an ongoing pattern with Kanye — attacking Kim to redirect everyone’s attention after a day of crazy antics where he has said every hateful and offensive thing he can possibly dream of.”

How or why anyone could trust or believe anything West says these days is beyond me. But it’s clear he’s still not over Kardashian. And it’s clear he has no shame in slinging mud in anyone’s direction.

Paul has not yet commented on the allegations.