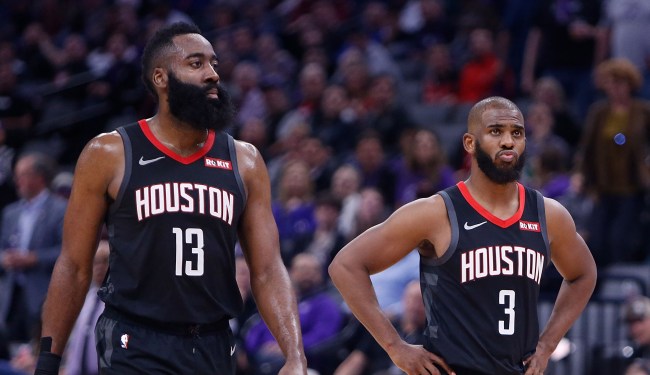 One of the best things about the NBA is all of the WWE-style drama that occurs when they players aren’t actually, you know, playing.

One of the most interesting of those stories this past season and into the offseason involved State Farm commercial buddies Chris Paul and James Harden.

The rift between the two star players appears to have reached its boiling point when they reportedly got into it following the Houston Rockets elimination from this year’s NBA playoffs, eventually leading to Paul being traded to the Oklahoma City Thunder.

Now, in a recent podcast, ESPN’s Brian Windhorst shed some light on just exactly what was behind some of the friction between Paul and Harden.

According to Windhorst, here’s some of what went down on the court between the two stars during the Rockets-Warriors series.

“Chris and James got into it on the court, and it was just over a schematic thing, where it was a spacing issue. I think Chris was trying to post-up and he was standing too close to James and was allowing too easy of a double-team or whatever,” explained Windhorst. “Chris barked at James, and James turned to him – and this was described to me by another player who was on the court – and he said, ‘with you it’s always f**king something.’”

Windhorst added, “It’s not even like it was that moment, but he’s had issues in the past with his teammates.”

That last statement jibes with an earlier report that some Chris Paul’s former teammates consider him to be a “bad teammate.” Sounds like neither player is going to miss the other one next season.