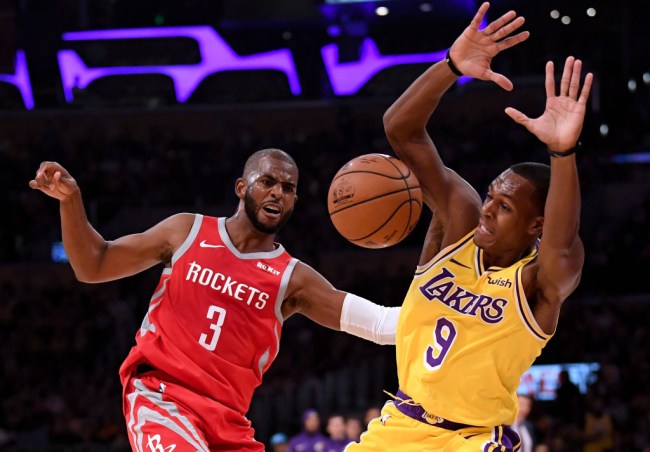 The Chris Paul vs. Rajon Rondo spat (literally) on Saturday night continues to be the gift that keeps on giving. The two veteran point guards engaged in a spit-flying, fists-throwing altercation that resulted in multiple game suspensions for both and their loved ones getting physical in the crowd.

As the inflammation from the fight wore down, another narrative was brought into light: who’s the better teammate? The debate was sparked by Rondo, who threw gas on the saga by calling Paul a “horrible teammate” who is wrongly perceived as a nice guy.

Given their history, it wouldn’t be a stretch to say that Rondo, a man whose been an agitator for over a decade in the league and played a large part in driving Ray Allen out of Boston to a bitter rival, is likely the more difficult teammate. Chris Paul is a State Farm agent with a baby face!

Welp, as former teammate of both, Ryan Hollins, proclaimed, “all that glitters ain’t gold.”

Ryan Hollins played with Chris Paul for two seasons in the NBA. I asked Hollins what he thought of Paul as a teammate, given the recent negative comments from Rajon Rondo and Glen Davis.

"He has some growing to do," Hollins said of Paul. "Everything that glitters ain't gold." pic.twitter.com/OYWpM6LmXN

Hollins also tweeted his support for Rondo, who he claims is the best teammate he’s ever had.

Hands down one of my favorite teammates EVER💯 pic.twitter.com/A82CGmKJwc

Glen Davis, another teammate of both Paul and Rondo, corroborated with Hollins’ statement, claiming Paul is a “very bad teammate.”

And, as For the Win points out, J.J. Redick claimed back in 2017 that Paul can be a difficult teammate for people who don’t share his personality.

“I’m sure I’m a tough leader,” Paul finally says. “But if I’m so bad to play with, then how come Luc and J.J. wanted to be here with me?” (Says Redick: “Is Chris tough to play with? Yes, in the sense that there’s an edge to the way he plays, and if you have a different personality, it can grind at you a little bit. I always liked it.”) [via ESPN]

This tweet isn’t as much an advocation for Paul as it is a knock on Rondo. Does Chris Paul’s own GM think he’s a shitty teammate?! Toss it in the rumor mill and crank it up to 1,000!