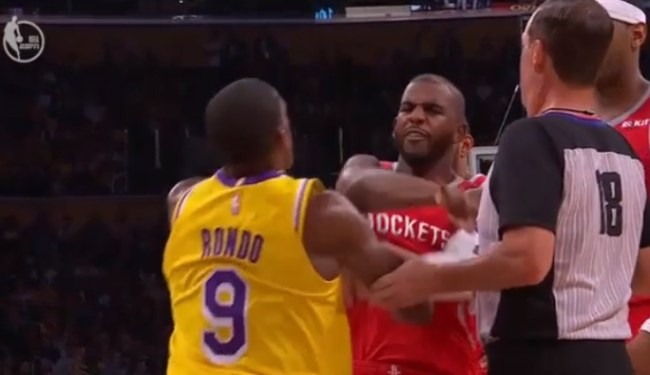 Over the weekend, Chris Paul and Rajon Rondo got into a wild brawl after Paul accused Rondo of spitting on him.

Despite the video evidence against him, Rondo denies deliberately spitting on Paul.

This is the only time I’m going to address this,” Rondo told ESPN on Tuesday. “I had a mouthpiece in my mouth and I was exasperated because I was about to tell him to ‘get the [expletive] out of here.’

“Look at my body language [in the video]. My hands on my hips. I turn away for a second. Look at Eric [Gordon] and Melo [Carmelo Anthony] in the video. If they saw me spit, they would have turned their face up or something. They had no reaction.”

Rondo was eventually suspended three games for his actions on Saturday, while Paul only got two games.

Rondo wasn’t happy that he was suspended for more games than Paul and ripped his longtime rival for being a fake good guy.

“Of course, the NBA went with his side because I got three games and he got two,” Rondo told ESPN. “Everyone wants to believe Chris Paul is a good guy. They don’t know he’s a horrible teammate. They don’t know how he treats people. Look at what he did last year when he was in LA; trying to get to the Clippers locker room. They don’t want to believe he’s capable of taunting and igniting an incident.

” … He comes out and says I spit and the media sides with that.”