Kevin Durant Reportedly Told Russell Westbrook He Was Returning To Thunder In 2016 Day Before Leaving, Per Stephen A. Smith 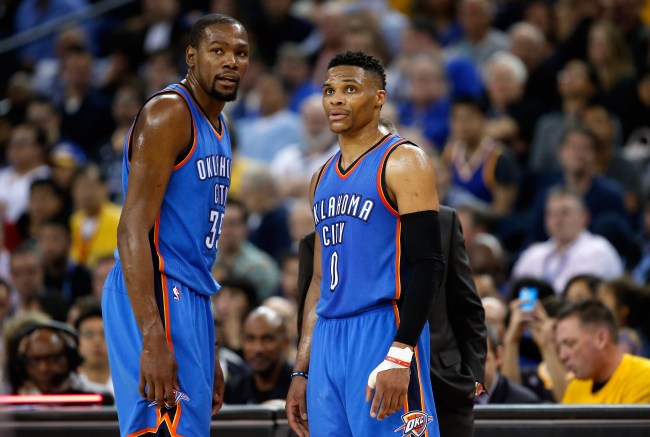 Kevin Durant recently shocked the NBA by bolting from the Golden State Warriors to team up with Kyrie Irving and DeAndre Jordan on the Brooklyn Nets — even if early indications are he may miss all of next season as he recovers from a ruptured Achilles — but this isn’t the first time KD made headlines with a free agent decision. That’s because, during the summer of 2016, the one-time league MVP went from the OKC Thunder to the Warriors to chase rings, which was something he accomplished twice, but was never really accepted by fans for doing.

With Durant now back on a team where he’ll have to start from scratch — not one that had already won a championship and 73 games prior to his addition — we’ll have to see how things work out for him. And since the sharpshooter made another bombshell decision this summer, ESPN’s Stephen A. Smith recounted what went down in 2016 when he first left the Thunder.

Talking on First Take earlier today, Stephen A. mentioned that he heard from sources that Kevin Durant had dinner with fellow superstar Russell Westbrook and a few other OKC teammates in the summer of 2016, telling them that he was returning to the team. The very next day, KD allegedly went to the Hamptons, which is where the infamous “Hamptons 5” meeting took place with the Warriors, which convinced the now two-time NBA Finals MVP to leave for the Bay Area.

While Durant has called Smith’s claim “BS,” according to Stephen A. himself, it’s still interesting to think about. Check out the videos below from Smith’s report.

—@stephenasmith on KD after he reached out about the story regarding how he left OKC pic.twitter.com/E6Sfny9mkC

Who knows if Stephen A. Smith’s original report is true or not, but, if so, it sort of provides a reason for why Kevin Durant and Russell Westbrook had some bitterness after KD left. And, while Stephen A. was quick to say that Durant didn’t lie to Westbrook — but simply changed his mind when the Warriors pitched him — Russ doesn’t seem like a guy who takes something like this lightly.

It’s all in the past now and it seems like both guys have moved on from any drama, but it’s interesting to see that Kevin Durant’s former free agency decisions are still making headlines three years later.