Kevin Durant Regretted Leaving OKC, Asked Agent: ‘Why The F— Did You Let Me Do This To My Life?’ 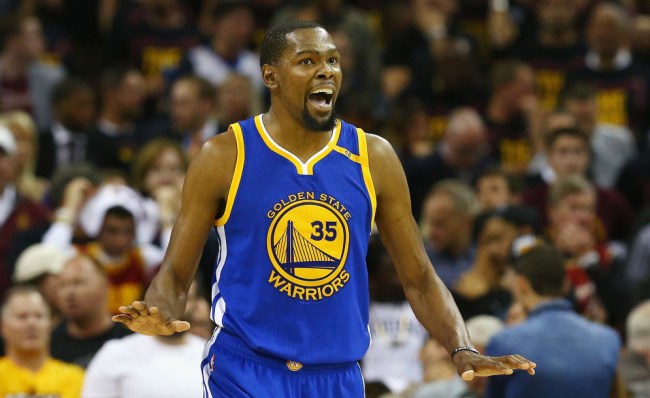 Kevin Durant went from superhero to supervillain for Thunder fans in a blink of an eye when he announced that he was leaving Oklahoma City to build a superteam with the Golden State Warriors in 2016. Understandably, the cutting backlash from once adoring fans was absolutely difficult for Durant and it turns out that the reprisal from OKC fans made Durant immediately regret his decision to leave the place he called home for eight years.

Durant’s agent revealed just how much the NBA superstar took the criticisms from fans who were idolizing him before his decision to leave. In an interview with San Francisco Magazine, Durant’s agent revealed the star had second thoughts on leaving the Thunder. Durant’s agent/business partner Rich Kleiman shared the story of Kevin having overwhelming remorse only days after he signed with the Warriors while in China on a week-long promotional tour with Nike Basketball.

“To have so many people just say, ‘Fuck you,’ that really does it to you,” Durant tells me, still clearly anguished. “Because I truly had invested everything I had into the people I played for…. And for those people that I know and love and trust to turn their back on me after I was fully invested in them, it was just…more than I could take. I was upset.”

“You were fucked up in China,” Kleiman, looking up from his phone, offers from his plane seat across the aisle from Durant and me.

“That was before I met anybody from the Warriors and dove into the culture. I was basically on my own,” Durant says.

“It was like you were in between two teams.”

“I’m telling you, I was fucked up for a while!”

“I was worried about how my peers were going to feel about me,” Durant said. “In my profession, that’s the only thing I care about. So when I was talking to Kyle Lowry and DeMar DeRozan, and they were like, ‘Congrats, man, do your thing,’ and Paul George was like, ‘Congrats, man, I am happy for you,’ and Kevin Love was like, ‘Shoot, do what you gotta do,’ that eased my mind a little bit, because I want that from my peers.”

While it must have been an uncomfortable thing to do, the ends have definitely justified the means. Durant has won an NBA title and a Finals MVP award, which probably goes a long way in smashing any doubts and remorse he may have had.