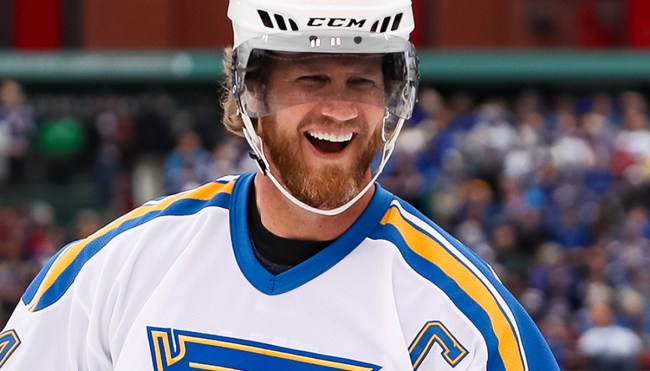 In 1993, the Hartford Whalers (R.I.P.) selected Ontario native Chris Pronger with the second pick in the NHL Draft, which kicked off a storied career that saw the defenseman play 18 seasons with five different teams on his way to securing a Hart Trophy, six All-Star Team selections, a Stanley Cup victory, and a couple of Olympic gold medals.

Pronger was enshrined in the Hockey Hall of Fame in 2015, and on Monday night, he was honored yet again when the St. Louis Blues immortalized the jersey that now hangs in the rafters of the Enterprise Center.

Prior to the team’s contest against the Predators, the team that Pronger represented for half of his NHL career thanked him for his contributions before raising his #44 alongside some fellow franchise legends.

"He is arguably the greatest defenseman to ever play the game."

And forever, his number will be hanging in the rafters at Enterprise Center. #stlblues pic.twitter.com/WboELf186N

Pronger also got the chance to speak to the crowd during the pregame ceremony and cemented himself as a true legend by pausing in the middle of his remarks to take a sip from a bottle of Bud Light before promptly deleting the entire thing after capping off the speech.

When you slam a beer at your jersey retirement ceremony, you truly are one of the greats. Congratulations @chrispronger. #stlblues pic.twitter.com/XQN8oqVRw3

Take notes, everyone else. That’s how you ensure you’ll always be remembered.