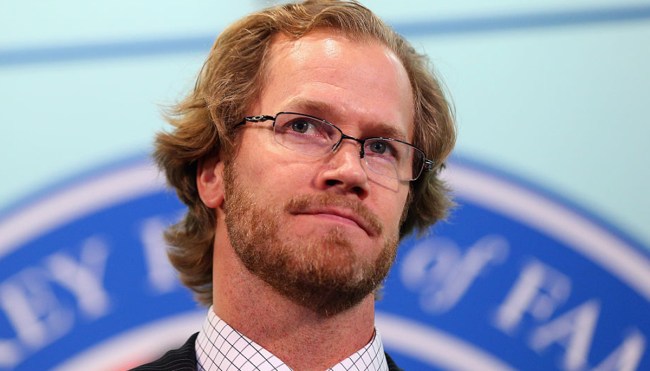 It can be difficult to fathom the truly insane amount of money some professional athletes get paid to play a sport for a living, and it can be even harder to understand how someone who made tens of millions of dollars over the course of their career can end up losing every single penny.

In the vast majority of cases, the explanation can really be boiled down to some incredibly simple math: people spent more money than they actually have. That includes Travis Kelce—who quickly changed his ways after blowing through his rookie deal thanks to sneakers and watches—and Gilbert Arenas, who spent his first season in the NBA living at Oracle Arena after overestimating the value of his first contract.

However, the math isn’t really that simple, as understanding the intricacies of your typical contract requires a fair amount of financial literacy.

Earlier this month, former NHL player Chris Pronger went viral for describing some of the wild ways he witnessed guys blow through money over the course of his career. On Wednesday, he turned his attention to finances once again when he provided a fascinating breakdown of a hypothetical $30 million, five-year deal to show how much money professional hockey players actually make compared to the numbers that make headlines.

When you hear about X player making $30M over 5 years ($6M/yr) you think wow he made it. However that is not always the reality, in this thread I am going to break down how much they take home and where the rest of it goes.

Pronger kicked things off by highlighting the escrow money that Brad Marchand brought into the public consciousness when he used to it chirp the Hurricanes earlier this year.

For this thread here is the example:

Right off the bat escrow gets taken out of every check. On average about 10%. Most people have no idea about escrow. pic.twitter.com/uUcpyZaJUW

He then turned his attention to taxes and made it clear why the weather isn’t the only factor that makes playing in Florida an attractive option.

Pronger then touched on agent fees and the variety of other major expenses most players will have to shell out for over the course of a typical year.

Next is agents. They vary but typically the average is 3%. BTW that is 3% of the gross not post tax. So there is another 3%

For health you typically have a chiropractor, masseuse and trainer that you are paying for in and out of season. ($20k/yr)

Vehicle. Need to get to and from practice and games. ($75k)

So Player X is netting $2,591,000. Which is around 43% of the total number. Now keep in mind the average career is 4 years and the average salary is $2M. So yes this is still a nice amount of money but most people don’t realize how much comes off the top before they get to invest

Also keep in mind I am not including when athletes seasons are over they typically go somewhere to relax and unwind. Nor am I including a number of other ancillary expenses that typically come up. For me it was the odd suspension 🙁

As Pronger notes, a player in this situation would still have plenty of money to play around with, but it’s still a pretty eye-opening look at the inner workings of the game.