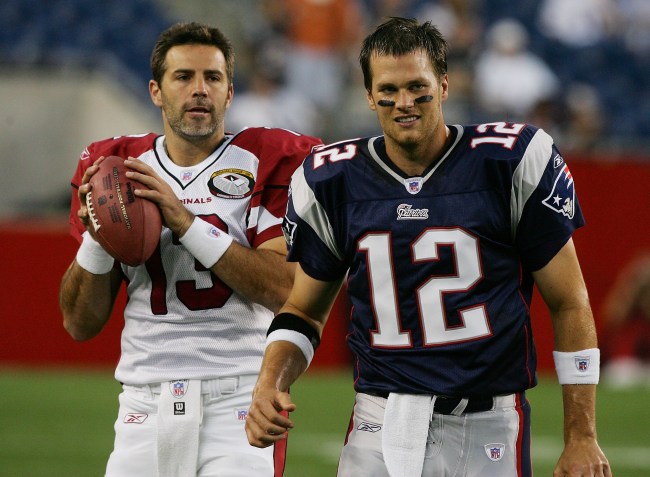 Chris Simms has taken the Skip Bayless approach to sports analysis. The NBC Sports NFL analyst and career backup QB is working his way through his Top 40 quarterback countdown and has evidently been in a coma for the past two decades.

Simms crossed into the top 10 recently and put two sure-fire Hall of Famers and the ninth and tenth best in the league–at No. 10: Drew Brees. At No. 9: Tom Brady.

There are two full divisions of NFL quarterbacks who are better than the guy coming off his sixth Super Bowl victory and the guy with the highest passer rating in the regular season in 2018.

Simms list is still yet to be complete, as there are eight quarterbacks still left to be ranked. Among them, Patrick Mahomes, Aaron Rodgers, Russell Wilson, Ben Roethlisberger, and Andrew Luck.

Down to the Top 10 pic.twitter.com/eLs9SylqUp

Simms claimed that “the system makes them more than they make the system at this point,” which is an infuriating oversimplification especially for someone like Simms, who constantly touts around like he knows football better than everyone else. The counterpoint could easily be made that every quarterback is technically a “system QB” and that it’s been twenty years and not one other team has been able to duplicate this elusive system.

Kurt Warner, who helmed the “Greatest Show on Turf” Rams team that Brady beat to win his first Super Bowl during the 2001 season, created his own list of top quarterbacks in 2019, where he picked Brady as No. 1. Warner was personally offended by Simms’ ranking and shit got personal.

Simms then took a shot at Warner’s knowledge of the game, minimizing him to a “troll” and claiming he knows more because he’s on TV.

Chris Simms (@CSimmsQB) responds to criticism from @kurt13warner on his QB rankings:

"Oh no! Not part time analyst Kurt Warner the troll! … I'm way deeper in the weeds in all these subjects than Kurt Warner."

"I've seen him on the NFL channel like once in the last 50 days" pic.twitter.com/zKVEei7jyW

Wow!!! Ok now I don’t know fball, don’t watch it or work at it… all bc I haven’t been on network in last 50 days! Guess were done here… I’ll leave it to the experts until fball season!

Imagine being so far up your own ass that you categorize a two-time NFL MVP as a troll because he pointed out your own lunacy.