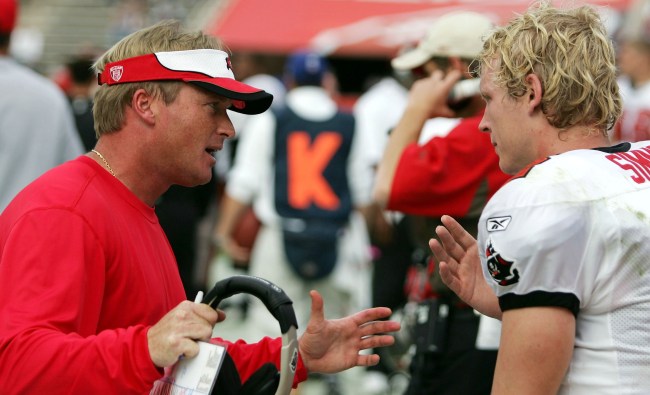 Back in the spring of 2004, former Tampa Bay Buccaneers quarterback Chris Simms was in Italy trying to enjoy his (Jon Gruden-approved) honeymoon, but the Bucs coach simply would not leave him alone.

Simms, who was going into his second season with the team and hoping to become the starter after being drafted in the third round in 2003, learned first-hand just how much of a pain in the ass Jon Gruden can be for his quarterbacks. Right, Derek Carr?

So… during Simms appearance on The Dan Patrick Show on Friday, Patrick wanted to know more about how Gruden wrecked his honeymoon back in the day.

Simms: “I’m in Italy. I’m not the starter in Tampa, but certainly I think he sees potential in me to be the starter. It’s going into my second season.”

Patrick: “This is in March, I think, when you took your honeymoon…”

Simms: “I believe it is. We haven’t started OTAs yet. But back in that time, Gruden loved to go out and we would have walkthroughs and he’d make people in the building wear jerseys and pinnies to simulate the defense and he’d draw up the cards, so he could get the new guys up to speed with the offense and things like that.

“Well, some of the older quarterbacks at the time were not there or around… I think that year it might’ve been Brad Johnson… and you know, he’s a veteran, he’s not there quite yet. So I take my vacation, of course asked for his blessing. ‘Hey, I’m going to go on a honeymoon with my wife, just two weeks and I’ll be back.'”

“We go on the honeymoon, I tell Gruden, like I said… I would say about day 8, one day I see I’ve got a few voicemails on my phone. Let me check my voicemails. I have four or five, and two of them are Gruden, on like, the same day. ‘Hey man, what are you doing? Hope the honeymoon’s going good. Look forward to when you’re back.’ And then literally he must have left a message two hours later going like ‘hey man, when are you coming back?’

“The next day I wake up… ‘I mean, what are we doing? Are you canoeing back from Italy?’ And he just went on and on and I cut my honeymoon short because I was feeling the pressure. I really was. I had gotten into the last phase of going into Capri, the little island off of Italy, we were going to go there for a few days… and my wife could see that it was starting to bother me and I knew I had the chance to be the starter. And I was like ‘you know what? The weather’s not that great right now, honey, let’s get out of here and go back home.’”

And Brian Griese ended up being the starting quarterback.

But hey, Griese got hurt in the sixth game of the season, Simms took the Bucs to the playoffs, and yeah, that was pretty much the highlight of his NFL career.