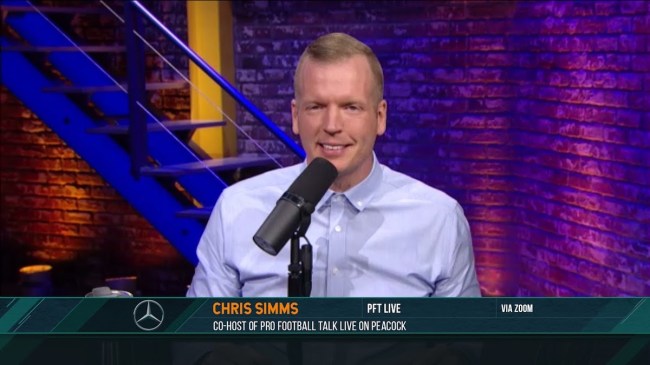 Despite making a career out of speaking on-air in recent years, NBC Sports’ NFL analyst Chris Simms absolutely butchered an ad read during the Thursday Night Football pregame show ahead of the game between the Los Angeles Rams and Buffalo Bills.

Prior to the first game of the 2022 NFL season, Simms — the son of Super Bowl champion Phil Simms and a former NFL quarterback who played for the Tampa Bay Bucs, Denver Broncos, and Tenessee Titans during his seven-year-long career — completely botched a promo for FanDuel as he stumbled through and mispronounced about 75% of the ad’s script.

“Now — and let’s — if you want to be an expert like in crush… like your friends on your grape (?), listen to Matthew Berry, alright. Now, downlude [sic] FanDuel app. Sportsbook app, excuse me. New customers get a guaranteed $150 of free bets with a single $5 bet on any Week 1 any-FL [sic] game,” Simms said during the trainwreck of a FanDuel promo.

For a guy who does a two hour daily talk show with ⁦@PFT_Live⁩ ⁦@CSimmsQB⁩ had the hardest time reading the ad!! Downlood any N if L game!! Maybe Rodgers isn’t the only world trying new methods – Well in that case we know Chris will end the show on a high!! pic.twitter.com/rFSC600xe0

Following the embarrassing moment, Simms — and NBC’s NFL broadcast in general — was getting thoroughly roasted on Twitter:

Is there a worse crew than Maria Taylor, Tony Dungy and Chris Simms?

we should all be embarrassed about chris simms on national tv

No one wants to hear Chris Simms, go back to Ozzy Osbourne.

How is Chris Simms on this show every Sunday? He's one of the worst voices in the sport

How does Chris Simms still have a job?

Does everybody find Chris Simms annoying or is it just me? #TNF

Get Chris Simms off of my TV

Having Chris Simms on this pregame show makes it almost unwatchable

Chris Simms is a scrub

Chris Simms is an embarrassment to television.

Can’t even watch pregame because dbag Chris Simms, what a joke @nbc who’s idea is this ?!

Josh Allen and the Bills certainly backed up their status as preseason favorites as they absolutely smoked the Los Angeles Rams on Thursday night, who looked like a shell of their Lombardi Trophy-winning selves. Allen, the favorite to win the NFL’s MVP award, also looked like he’s prepared to live up to evert ounce of hype that he’s received during the offseason.

RELATED: Von Miller Shows Off New Haircut For NFL Opener And He Got Absolutely Roasted