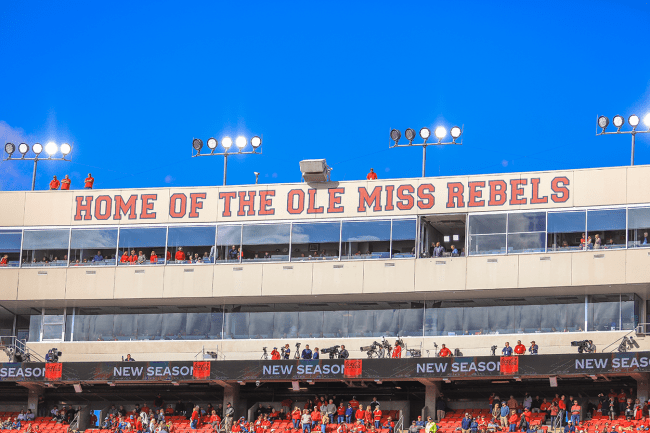 Four-star quarterback Christopher Vizzina is the No. 5-ranked prospect at his position and the No. 40 recruit overall according to On3 Sports. He recently stopped by Ole Miss and took one of the best recruiting photos to date.

Vizzina, a 6-foot-3, 194-pound righty from Briarwood Christian School in Birmingham, AL has more than 30 offers, including quite a few Power 5 schools. Among them, Notre Dame, Georgia, Clemson and Tennessee seem to be atop his list.

For the last year or so, the Tigers were considered to be the favorites to land his commitment. Other than the fact that Dabo Swinney bizarrely sat on his lap for one of the more strange recruiting photos to date, Vizzina has liked the Clemson program.

However, in recent weeks — being the last month or two — Vizzina has been trending positively for Ole Miss. He was on campus this weekend for an invite-only ‘Junior Day’ and loved what he saw from the campus, the program and the coaching staff.

Vizzina spoke with Ben Garrett of the Ole Miss Spirit (part of the On3 network) and said he “just loves it” in Oxford. You can also hear more about Vizzina and his visit on the #notcomitted podcast with myself and Zach Berry.

While in The ‘Sip, Lane Kiffin did not sit on his lap. Instead, Vizzina took some very cold pics. One of the shots in particular, modeled loosely after Jaxson Dart’s visit to Ole Miss, is absolutely incredible.

In the photo, Vizzina is just straight-up dunking on his dad and it’s awesome. Take a look:

Had a GREAT visit this past weekend at @OleMissFB

Vizzina’s photos at Ole Miss are what recruiting should be. He got to show off the drip, had a lot of fun, and was neither grinded on (Brian Kelly) or sat on (Dabo Swinney) by any of the Rebels’ coaches.