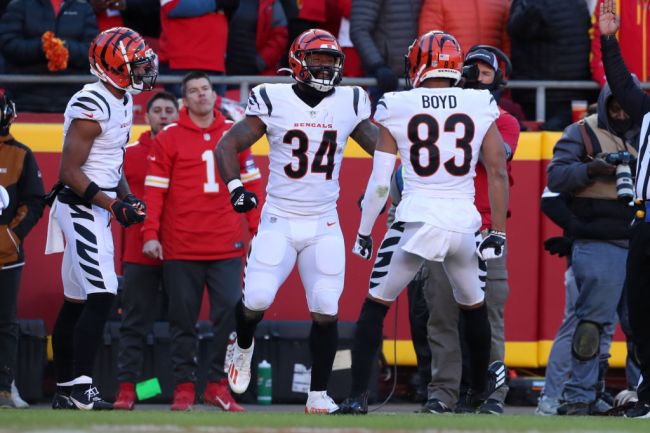 There are so many great matchups that are going to decide the outcome of this season’s Super Bowl. There’s Aaron Donald and the LA Rams’ pass rush against a leaky Cincinnati Bengals offensive line. There’s Matt Stafford against a Bengals secondary that just shut down Patrick Mahomes in the second half.

However, there is one matchup that really stands out for next Sunday. That matchup is Jalen Ramsey against Ja’Marr Chase.

Ja’Marr Chase took the league by storm in his rookie season, posting 1455 yards and 13 TDs this year. He carried that one into the playoffs, topping 100 yards in each of his first two playoff games.

Jalen Ramsey just might be the answer to stopping him. He had a tough week against Mike Evans last week, but no other receiver has topped 60 yards against him this season. It is very likely he will spend a lot of time matched up with Chase in the Super Bowl.

According to what Bengals’ receiver Tyler Boyd told Bleacher Report, that’s not a matchup Cincy is afraid of.

One thing about the Bengals:

They're not gonna play scared 👀 pic.twitter.com/OBH0bIbuCP

It’s the type of quote that will surely fire up Ramsey heading into this Super Bowl matchup. It also might not be the best approach to take in this game.

We saw in the Bengals’ win over the Chiefs, that the other Cincy receivers can step up and deliver wins for the team. Last weekend, it was Tee Higgins who stepped up as the Chiefs tried to take Chase away. Against the Rams, it could be Higgins or Boyd that gets the best matchup.

It would be a mistake to force anything towards Ramsey as he is exactly the type of corner who could change the complexion of the game in an instant. If the Cincinnati Bengals are going to take home the Super Bowl, Joe Burrow will need to take whatever the defense gives him.

Something tells me we’re going to see some fireworks next Sunday.