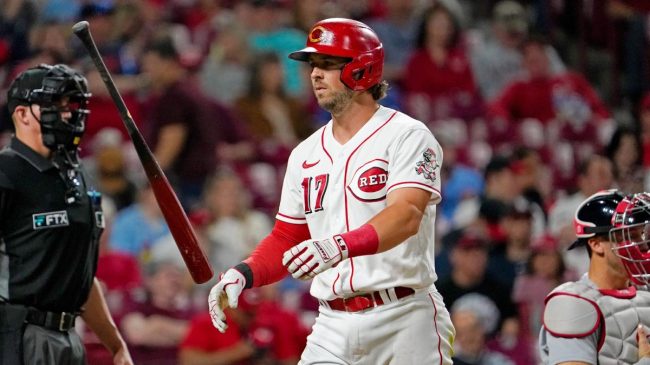 The Cincinnati Reds have been the MLB’s worst team through the first 15 games of the 2022 season.

The team is off to a horrid 2-13 start, and they currently find themselves on an 11-game losing streak dating back to the year’s opening series.

The Reds are the worst hitting team in the majors, mustering a team average of just .180, well below the Mendoza line. They’re one of just two teams that entered Sunday afternoon action hitting below .200 as a squad.

Cincinnati has also recorded league lows in slugging and on-base percentage while striking out a National League leading 145 times.

Pitching hasn’t been much better as Cincy holds a Major League worst 5.71 ERA while allowing opposing hitters to tally a .270 batting average.

Simply put, it’s not been the start that most Reds fans were hoping for.

For the first time in 99 innings

The Reds (+135 ML) have a lead pic.twitter.com/eTcRwLRnij

The Reds jumped out to a quick 2-0 lead in the first inning of Sunday afternoon’s matchup against St. Louis. It marked the first time in 99 innings that the team has had a lead after a full frame of action.

That’s the equivalent of 11 full games of baseball.

Cincinnati’s last lead (after conclusion of top AND bottom half of the frame) came way back in the ninth inning of a 6-3 win over Atlanta. Since then, they’ve either been tied or fallen behind after every inning for 11 straight contests. That’s absolutely brutal.

They trailed in 78 of those 99 innings while being tied in the other 21 frames.

Cincinnati is hoping to end the losing streak Sunday against the division rival Cardinals. They’ve gotten one monkey off their back, let’s see if they can hold on to this lead and land a win.