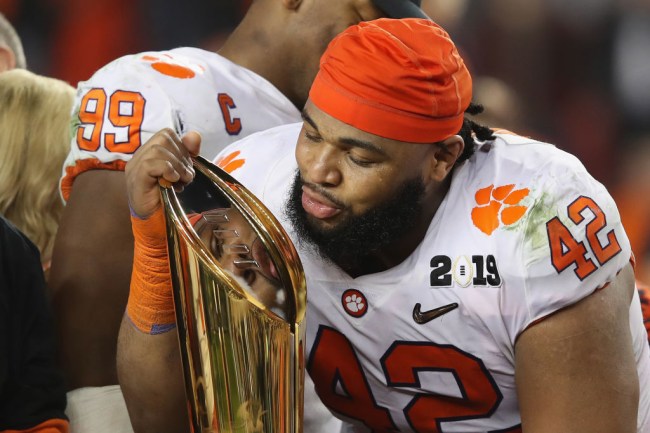 Last night, Alabama got absolutely thrashed by Clemson in the College Football Playoff National Championship, a game that looked like it would be an offensive shootout until the Crimson Tide forgot how to score points (which was probably Drake’s fault).

The Tigers celebrated their victory in full fashion and the postgame festivities were filled with plenty of highlights, including an amazingly heartfelt speech by head Coach Dabo Swinny.

Dabo with a legendary victory speech. How can you not be happy for this dude? pic.twitter.com/t9lHPEb6Tj

However, no one enjoyed the postgame festivities more than defensive lineman Christian Wilkins, who had a bit of fun with Swinney when he gave him a wet willie during another interview.

You only get one chance to give your head coach a wet willy on national TV 😂#NationalChampionship pic.twitter.com/VF9mwq4z6j

Wet willies are the new Gatorade shower. You read it here first.

Based on what I’ve seen today, a lot of people say Swinney had the best speech of the night. However, I would beg to differ, as I’d argue Wilkins and his teammate Clelin Ferrell easily had the best sound clip of the evening when they decided to channel their inner Suge Knight in an interview.

In 1995, the infamous co-founder of Death Row Records took the stage at the Source Awards In New York City at the height of the East Coast-West Coast hip-hop wars. He proceeded to call out Bad Boy Records and The Artists Formerly Known As Puff Daddy on their home turf in one of the most iconic moments in rap history.

After Monday’s game, Wilkins got a chance to step up to the mic and he and Ferrell proceeded to give one of the best recruitment pitches you’ll ever come across.

I think I want to play for Clemson now.