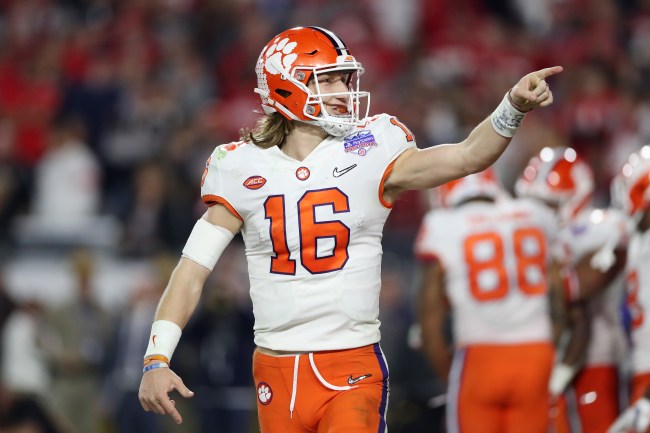 The college football season could be doomed but Trevor Lawrence wants to play.

Sports Illustrated’s Pat Forde and Russ Dellenger are reporting that the college football is going to be canceled in the next 72 hours after Power 5 commissioners held a conference call on Sunday.

"In the next 72 hours, college football is going to come to a complete stop."

Leaders around the industry are meeting over the next three days with expectation of a postponement or cancellation to the 2020 fall college football season.

Amid reports of the college football season being canceled. Lawrence, who is a surefire first-round draft pick, took to Twitter to make a passionate plea to save the season.

Trevor Lawrence needs a 2020 season less than anyone in college football, yet he’s fighting the hardest for one pic.twitter.com/9qKkorxenj

Let’s work together to create a situation where we can play the game that all of us love. Not divide and argue. There is a way forward

People are at just as much, if not more risk, if we don’t play. Players will all be sent home to their own communities where social distancing is highly unlikely and medical care and expenses will be placed on the families if they were to contract covid19 (1)

Players being safe and taking all of the right precautions to try to avoid contracting covid because the season/ teammates safety is on the line. Without the season, as we’ve seen already, people will not social distance or wear masks and take the proper precautions

Update: Several college football players have joined Lawrence and are saying they want to play next season.

Hey everyone 😁👋🏾 just over here wanting to play some football #WeWantToPlay pic.twitter.com/JqYysGYm5r

There’s been too much work put in!! #WeWantToPlay

I have complete confidence in the Iowa Medical staff. #WeWantToPlay

If opting-out is ok, then opting-in should hold just as much weight. Let those who wanna play, play and those who don’t, don’t. #WeWantToPlay

#WeWantToPlay Cancelling the college football season is not the answer. We are in the safest environment possible with strict protocols put fourth by a professional medical staff. Cancelling will result in players being more at risk. It is in our best interest to stay and play!