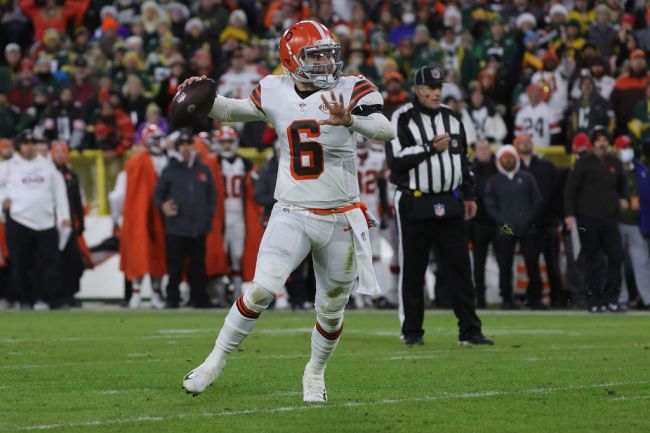 With all of the craziness we’ve already experienced during this NFL offseason, it’s easy to think we must almost be done. However, there is at least one more big move that needs to be made this offseason. The Cleveland Browns still need to trade Baker Mayfield.

With potential suitors like the Indianapolis Colts and Atlanta Falcons coming off the board as options this week, the Browns are left scrambling to try and find a trade partner for Mayfield.

As their options have dwindled, it seems their trade demands are diminishing as well. According to Browns beat reporter Mary Kay Cabot, the Browns aren’t looking for a 1st round pick in return for Baker Mayfield.

#Browns not seeking a 1st-rounder for Baker Mayfield; his trade request and intent not to play for them didn't drive the Deshaun Watson deal, and more: Browns Insider https://t.co/0iIzdkEEx3

The Browns settling for less than a first round pick is a bit of a surprising revelation. We’re only 4 years removed from Baker Mayfield being the top pick in the NFL draft. In that time, we’ve seen Mayfield turn the Browns from an 0-16 team with no hope into a team that actually won a playoff game.

He has at least shown the ability to be a serviceable starter in the league and at only 26 years old, you would think that would be worth a first round pick. Even the Eagles were able to get a 1st for Carson Wentz and he was in a similar situation, but with injury concerns.

If taking a chance on Mayfield isn’t going to cost a 1st rounder, there should be plenty of teams open to the idea. The Seahawks and Panthers are obvious choices, but now even the Giants should at least be considering the idea offering a second rounder for Mayfield.

This is truly turning into a sad end to Baker Mayfield’s time in Cleveland that once seemed so promising.