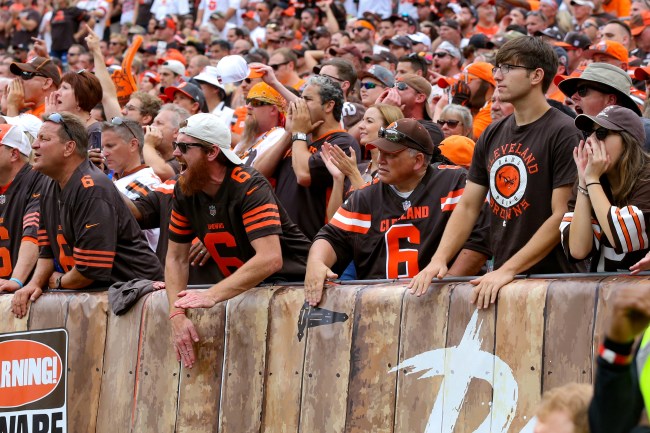 How is banning a fan for life from attending a game even enforceable?

It’s not. I am technically banned from Fenway Park for running onto the field and sliding on the tarp during a rain delay in 2010 (that’s me!). I have been to no less than 10 Red Sox games since. Also, for my reputation’s sake, I hope you noted that I did my shenanigans during a stop in play, because I’m not a fucking neanderthal.

A Cleveland man named Eric Smith got a call from Bob Sivik, a ticket executive from the Browns, informing him that he is no longer allowed FirstEngery Stadium for as long as he shall live.

Why? Because the Browns believed Smith to be the asshole who threw beer on Titans’ Logan Ryan during Sunday’s disappointing loss for Cleveland.

This @budlight’s for you?@RealLoganRyan and the @Titans got doused by beer by a @Browns fan after the Malcolm Butler pick-6. 🍺 pic.twitter.com/mQ4QAO8ztM

I legit just got a got from the @Browns telling me I've been banned from the stadium for throwing the beer in Logan Ryan's face Sunday. I'm fairly certain I haven't been to a game since 2010.

Eric told Sivik this important piece of information, but claims that the executive didn’t care, saying he had been caught on multiple cameras around the stadium, that the team had matched his tattoos, and that he had bought a ticket, the Cleveland Scene reports.

The banning current stands as is. Just further proof that every shitty, disappointing, underachieving loss needs a scapegoat.