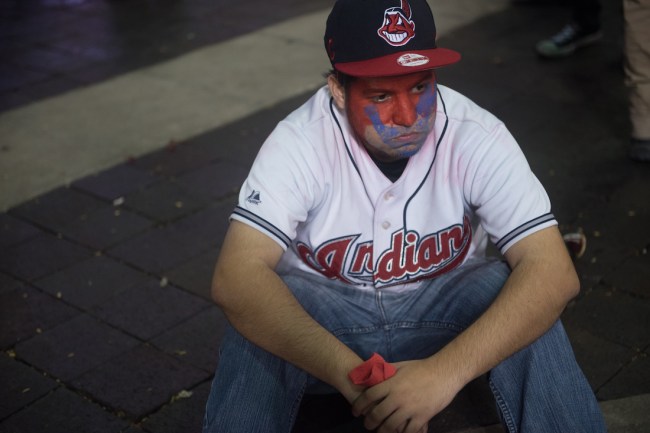 As a Cleveland Indians fan, it was absolutely pathetic to see the team lose in 30-degree weather on Opening Day to the Detroit Tigers, especially with last year’s Cy Young Award winner (Shane Bieber) on the bunt. Forget the cold, though, what made things worse was the snow, which was so bad that it caused the Tigers’ Miguel Cabrera lose sight of the baseball and slide into second base — even though his hit was actually a home run. Overall, a pretty awful showing by my Tribe.

But there are 161 games left in this MLB season, so there’s no reason to get down about the first nine innings of the season, right? Well, one Indians fan seems to think differently, and didn’t just crush some beers and scream some profanities to his TV screen after the Tribe’s loss, but, instead, decided to sound the alarms by calling into a radio show.

If the fan wasn’t already feeling down about the Opening Day performance against the Tigers, he definitely was after encountering an impassioned Bruce Drennan, a longtime Cleveland Indians radio broadcaster. As the fan complains about the first game of the season, Drennan doesn’t just cut him off, but completely owns the poor guy, mercilessly mocking him and calling him an idiot over and over. It’s pure gold, so take a look below at the clip.

Cleveland broadcaster Bruce Drennan GOES OFF on a caller! 😳😂 pic.twitter.com/mf06W8L43c

Not sure if Bruce Drennan is the founder of the Franmil Reyes Fan Club on Facebook or something, but the 70-year-old sure wasn’t hearing the caller spew his B.S. about the Cleveland Indians’ slugger. Rightfully, so, too, because, again, it’s the first game of the MLB season, so there’s no reason for anybody to overreact and proclaim it’s time to blow the roster up.

However, given the ridicules Drennan continuously spewed during the on-air exchange with the fan, not everybody on Twitter found the argument (or insults) amusing. Here’s what some people on Twitter were saying after the clip went viral.

Wow. Take this guy off the air. He has no right to talk to people that way.

is the caller wrong? where do you pitch Franmil, low in the zone.. this lineup hasn’t had a formidable hitter since EE. it’s brimming with guys that had “potential” but at some point we have to see that actualized otherwise what’s the point. pic.twitter.com/4mhcgB1Qi2

Buddies wife on the other side watching her husband get degraded like "well I guess I'm going to bed early tonight" pic.twitter.com/2G9Z85Nt75

Did Bruce Drennan go a little overboard with this Cleveland Indians fan? Maybe. But, c’mon, he only called the guy an idiot, so it’s not like the radio host dropped a bunch of swear words and degraded the caller over and over — as we’ve seen other people do on-air — so, hopefully, the host doesn’t get in trouble over this.

It’s good to have baseball back and fans (even just a few) in the stands. If this type of stuff is happening on Opening Day, I can only imagine what might happen the rest of the MLB season anytime fans call into radio shows. I’m here for it, so bring it on.