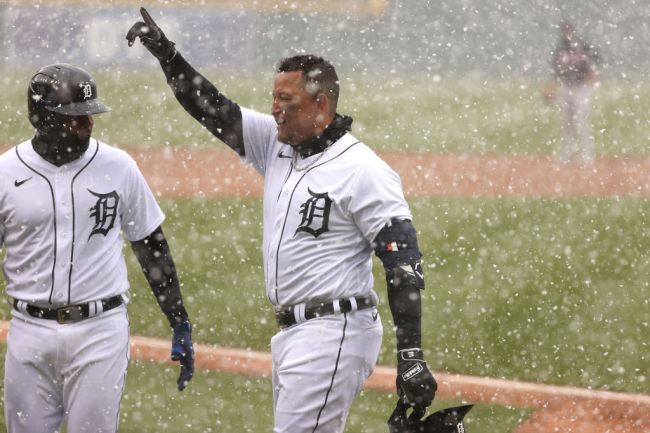 Miguel Cabrera made a conscious effort to slim down in the offseason and the results are already paying off. He was listed at 249 pounds last season and showed up to spring training about 25 pounds lighter, with hopes of getting back to elite form in the later portion of his career. The 37-year-old baseman began his quest on a high note. He stepped up to the plate in his first at-bat of the 2021 season and crushed his 448th career home run over the right field wall— but he didn’t know it was gone and slid into second after hustling on the base path.

As Cabrera stepped up to the plate in Detroit, the temperature sat around 30 degrees with a fairly significant snowfall. The players took the field with overcast skies, but as the game began, the snow started to come down.

It’s snowing sideways in Detroit as the Tigers take the field for #OpeningDay pic.twitter.com/WqY73vhvMV

Thus, when Miggy got up to the plate, he couldn’t see the “biggest snowflake of them all” as it flew over the fence and got on his horse. His speed was never significant to begin with, and at almost 40, it’s nearly nonexistent, so he legged out what he thought was a double. After sliding into the bag, the hit was called a home run and he headed home.

Miguel Cabrera hit the first home run of 2021, but he couldn’t see it in the snow and slid into second 😂 #OpeningDay
pic.twitter.com/scXW2kiqKW

The home run was reviewed and determined to be a home run, which was the first of the 2021 season by any player on any team. It made for a beautiful visual.

Petition to put this in the Louvre. pic.twitter.com/bKrBSgwrd5

(via @Christopher2_4 on IG) pic.twitter.com/Spxtn3xNTf

Like father, like son. The elder Cabrera will look to keep his hot start going on a Tigers team that isn’t expected to contend for the World Series, but could be pretty good relatively quickly with young pitching and a rebuilt core. If Miggy can get back to his younger form, who’s to say that Detroit won’t be the surprise team this year?