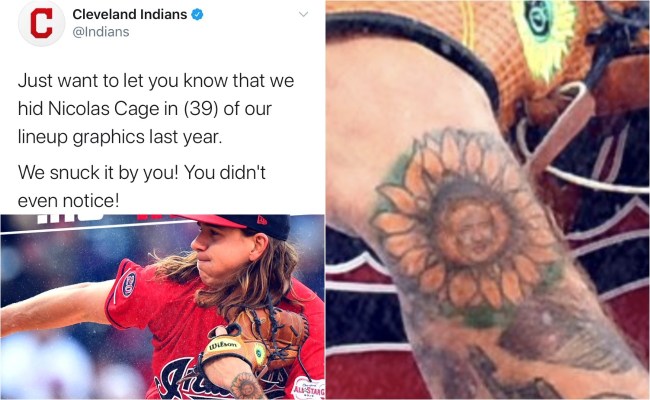 Round of applause. Standing ovation. SPEECH! SPEECH! SPEECH! Sometimes you just need to tip your cap and give credit where it’s due — acknowledge the undeniably presence of greatness. The Cleveland Indians’ social media team secretly inserting Nicolas Cage into 39 of 2019’s line-up graphics and waiting an entire year to tell people certainly qualifies as one of those instances. I hope whichever intern or social media coordinator that thought of his has gotten a raise in the last 12 months, cause this — this right here — is as good as social media gets.

Just want to let you know that we hid Nicolas Cage in (39) of our lineup graphics last year.

We snuck it by you! You didn't even notice!

It's our greatest treasure.

Go on a scavenger hunt if you please. We will send master hunters a letter of congratulations. pic.twitter.com/4qq3BnSxBK

According to the Indians’ Twitter account, there are a total of 39 (!!!) graphics that feature Nicolas Cage’s beloved mug. And believe it or not, there are actually a few brave souls out there who tracked down the other 38 Cage faces —  a truly remarkable feat. 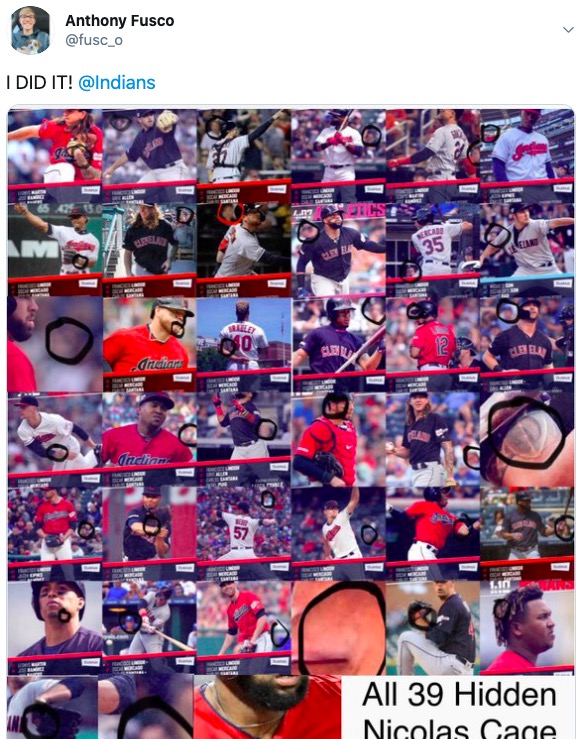 It really is a testament to Cage’s unique cult of personality that — despite the fact that he’s largely been a B-movie actor for the last decade-plus — the former Academy Award winner (yes, Cage won an Oscar for Best Actor in the 90’s for his work in Leaving Las Vegas — HEAVY movie) remains at the forefront of the internet’s collective consciousness.

Luckily for us, we could potentially be entering something of a Nic Cage Renaissance in the coming years, as the legendary thespian is set to star as Tiger King star Joe Exotic in an upcoming scripted series, in addition to playing HIMSELF (and reenact famous Nicolas Cage movie scenes) in the upcoming and predictably bonkers-sounding movie The Unbearable Weight of Massive Talent.