The Cleveland Indians Trolled The Heck Out Of Kevin Cash, The Tampa Bay Rays Manager

Before he took over as Manager of the Tampa Bay Rays, Kevin Cash was a catcher in the major leagues. He played for the Blue Jays, Devil Rays, Red Sox, Yankees, Astros, and the Rangers. He was a solid catcher when it came to framing pitches but Kevin Cash was absolutely atrocious when it came time to swing a bat at the plate.

From 2007-2008, Kevin Cash was the personal catcher of Tim Wakefield. Tim was a knuckleball pitcher for the Red Sox, and catching for a knuckleballer requires a special type of attention. The Boston Red Sox manager at that time, the man in charge of Kevin Cash, was Terry Francona.

As you most likely know, Terry is now the manager of the Cleveland Indians and Kevin Cash is the manager of the Tampa Bay Rays. Those two teams faced off last night in a rare 6 pm Monday night game which saw the Indians claw back from a disastrous 5-run first inning from the Rays to win 7-8. Prior to the game, Indians manager Terry Francona took the opportunity to troll the shit out of Kevin Cash by putting this up on the big screen: 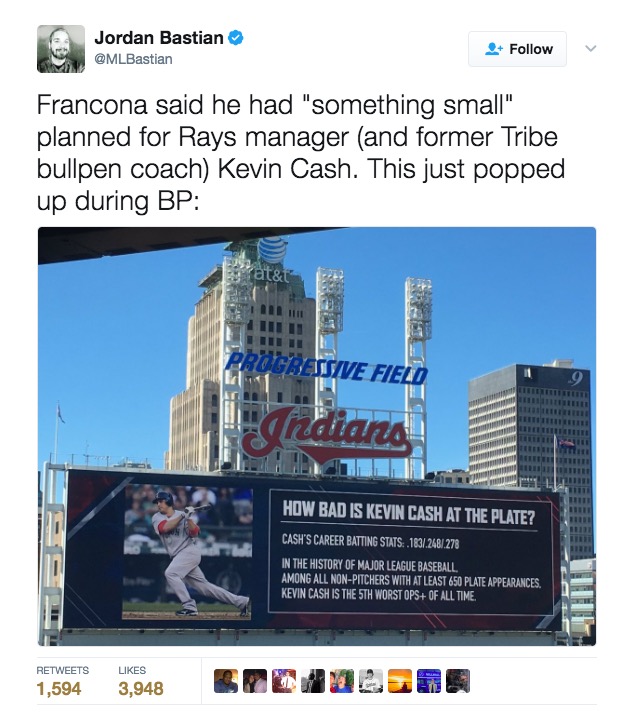 Now, this is all in jest. There’s no bad blood between Kevin and Terry, and I know this for a fact because randomly, I’m lifelong friends with Terry’s half-sister and brother-in-law. Terry Francona was actually very instrumental in helping Kevin Cash transition from player to manager, and there’s certainly a mentor-style relationship between the two men.

That makes this even more hilarious. That two friends can square off in an MLB game and one can troll the shit out of the other in front of thousands. I love it.