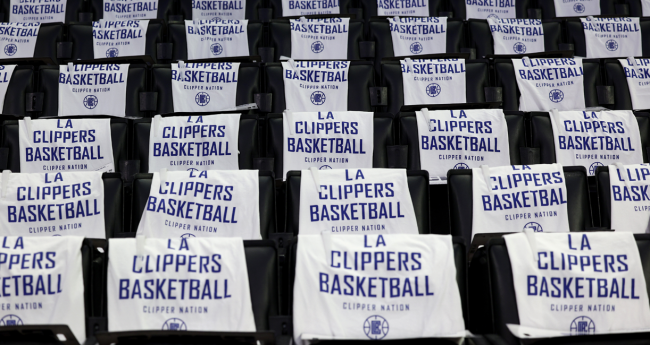 While the Los Angeles Lakers will be stuck in the horrifically named Crypto.com Arena for the next 20 years (unless they move), the Clippers are already well underway in their plans to move into their own brand spanking new arena for the 2024-25 NBA season.

Last September, the Los Angeles Clippers broke ground on what is being called the Intuit Dome in Inglewood.

Join us at 10AM PT for the @Intuit Dome groundbreaking ceremony LIVE on YouTube » https://t.co/ZuVLSZ8tJ0 pic.twitter.com/ZC546rb17g

The Los Angeles Clippers new arena is going to be amazing

Also inside the dome will be something the Clippers are calling Courtside Cabanas. They are basically suites, but they are located down at courtside with exterior seats positioned behind the baseline with the suite directly behind them.

There will also be something called Backstage Bungalows, which will offer hospitality for pregame and halftime as well as sideline lower bowl seating.

Then, of course, there will be your typical suites, called Halo Suites by the Clippers, which ties nicely into the “halo” scoreboard.

This one-of-a-kind scoreboard is almost an acre in size (or the equivalent of 3,592 60-inch televisions), is double-sided, will broadcast the game in 4K, and provides optimal sightlines from every eat, especially for those seated in the upper bowl.

Welcome to Intuit Dome! Our Halo Board will create one of the most intense live experiences in sports. pic.twitter.com/GP4sAytNeV

“Is this a great investment? No,” Clippers owner Steve Ballmer said prior to the groundbreaking back in September. “I’m probably better off leaving my money in the stock market. But it’s an okay investment.”

Judging by the reactions of many NBA fans to the halo scoreboard alone, it’s more than okay.

Clips are coming up 👏

@LakerFanSince74 Damn🔥You seeing this Unc?? The clippers new stadium bout to be the best in the league, hopefully your lakers can fix that dump they playing in

Gotta make up for the fact ain’t no banners finna be hanging from those rafters. 😊

There’s always one in every crowd.