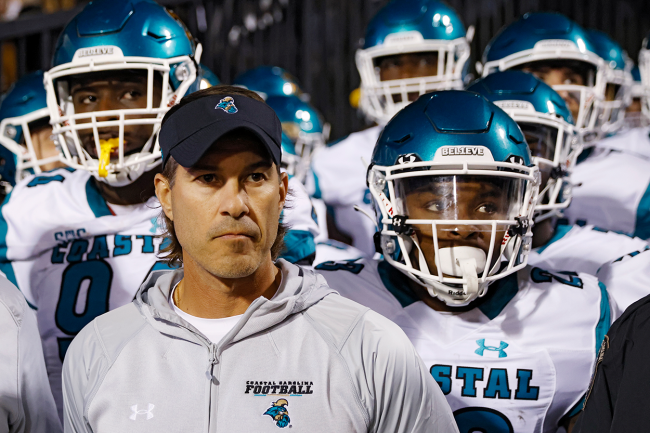 Coastal Carolina football has seen a meteoric rise in the last few years. After joining the Sun Belt in 2017, the Chanticleers did not win more than five games in their first three years on the FBS level and then suddenly recorded back-to-back 11-win seasons in 2020 and 2021.

Needless to say, the buzz around Myrtle Beach has been significant. And to make things even better, Coastal Carolina is one of the most fun teams in the country both on and off of the field.

Not only does head coach Jamey Chadwell run a revolutionary, high-speed offense, but the team plays with a chip on their shoulder. They are absolute maniacs in the weight room.

Coastal Carolina football is a bunch of absolute savages with mullets 😳 pic.twitter.com/WVo2DOeN6o

They do not care about your feelings. They just want to win.

COASTAL DOES NOT CARE ABOUT YOUR FEELINGS!! 🐔😤pic.twitter.com/HKD4Mw1gy1

In addition to their on-field play, Coastal’s off-field antics are just as electric. Whether it be celebrating a win by competing against Joey Chestnut in a pizza-eating contest, playing an intense game of walkball, or decapitating a wolf in the locker room, the Chanticleers are always up to something.

They even take that excitement and fun to the recruiting trail.

Last year, after taking the world by storm in 2020, the team debuted a new, custom jeep painted in teal from top to bottom. Coastal breaks it out during recruiting visits and it’s sick.

The 2020 Rubicon (aka Chanticon) has a 2.5-inch lift and 35-inch tires. When the recruits get to campus, they get to bool out with the jeep in front of the stadium and take some fuego visit videos. Here is an example from over the weekend:

The trend of using cool custom cars during recruiting is super big right now. Lane Kiffin was whipping recruits around in his Aston Martin and his Porsche during the offseason and five-star quarterback Nico Iamaleava took a fresh G-Wagon pic before committing to Tennessee.

Of all of the vehicles, however, the Chanticleers were not only ahead of the curve, but their jeep is the most team-oriented, unique and totally baller. Wouldn’t you want to ball at the beach?