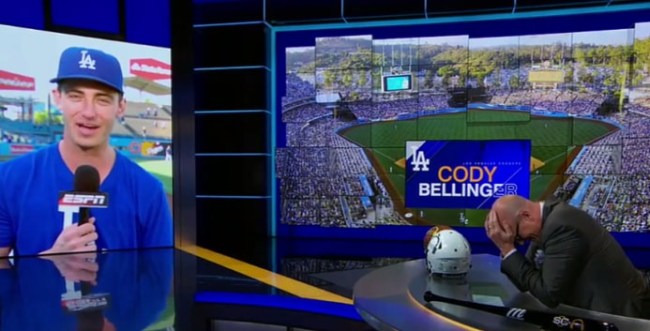 Los Angeles Dodgers rookie Cody Bellinger has been carrying the Los Angeles Dodgers with his unbelievable performance on the field. In only 56 games the 21-year-old rookie has belted 23 home runs and added 51 RBIs with a .652 slugging percentage. Cody knows how to mash a baseball. What Cody doesn’t know is Jerry Seinfeld. The rook got torn apart after revealing that he had no clue who Jerry Seinfeld was.

On Friday, Bellinger was interviewed by ESPN’s Scott Van Pelt when Cody was asked if he knew who Jerry Seinfeld was, and the youngin’ responded by saying, “I’m not gonna lie to you. I know the name, but I couldn’t put a face to the name. I don’t really know what he does, man. I’m sorry.”

SVP finds out Cody Bellinger knows Jerry Seinfeld's name, but does not know what he does pic.twitter.com/sZqQIx0l22

Not knowing Jerry Seinfeld? I mean who does Cody Bellinger think he is… Keith Hernandez?

It was later confirmed that Bellinger knew who Jerry Seinfeld was after seeing a photo of the legendary comic and TV star.

Cody Bellinger said he looked up a picture of Jerry Seinfeld on the Internet and recognized him.

Bellinger even issued an apology for his lack of essential comedy knowlege.

However, the damage was done and his Dodgers teammates roasted Bellinger for not knowing Seinfeld.

The only reason people are looking past this is because you hit so many homers lol 😂😂😂 https://t.co/r29R8HaFvl

What can you expect? He's like 13 years old! #MillenialKid

He didn't know who Kesha was so I kinda get a pass on this?

Cody argued that teammate Alex Wood didn’t know who Kesha was, which did not help his argument.

He didn't know who Kesha was so I kinda get a pass on this?

To his defense, Bellinger was born in 1995 and was only two-years-old when the final episode of “Seinfeld” aired. Bellinger had better hope that Jerry Seinfeld doesn’t meet him in real life because he will demand someone get Cody a résumé.