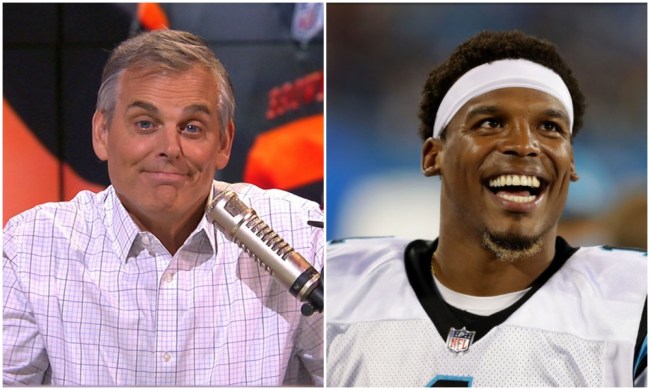 Cam Newton is a New England Patriot after signing a one-year deal with Bill Belichick’s squad and Colin Cowherd offered up a ‘courageous’ statement following the news.

Cowherd immediately jumped on the Newton bandwagon on Sunday night and did the unthinkable by predicting that Newton, a former league MVP, would beat out Jarrett Stidham for the starting role in New England. Stidham has thrown four career passes in the NFL, for those unaware. Maybe Cowherd’s tweet was supposed to be taken as sarcasm, but who knows with him?

Most sportscasters don’t have the courage to just go with a strong take and deal with the blowback but —-I’m predicting Cam Newton will beat out Jarrett Stidham for the Patriots starting QB job.

What’s interesting here is that not too long ago Cowherd was totally against Newton signing with the Patriots; he didn’t see him as a fit for New England. Freezing Cold Takes, rememberer of all, shared a video of Cowherd laying out a number of reasons as to why the Pats shouldn’t be interested in Newton.

Cowherd’s biggest gripe against Newton was that he wasn’t an accurate quarterback before claiming “Cam’s not [Belichick’s] guy, there’s nothing about Cam that interests him.”

Cowherd is known to go back-and-forth with his takes and opinions, even more so than most sports radio hosts. This is just another example of him waffling and falling into the here and now hysteria. He’ll be the first to come back and reference this exact moment if the Newton experiment in New England is a flop.

We’re talking about a guy in Cowherd that believes Carson Wentz is the third-best QB in the NFL right now and is a sure thing Hall of Famer.