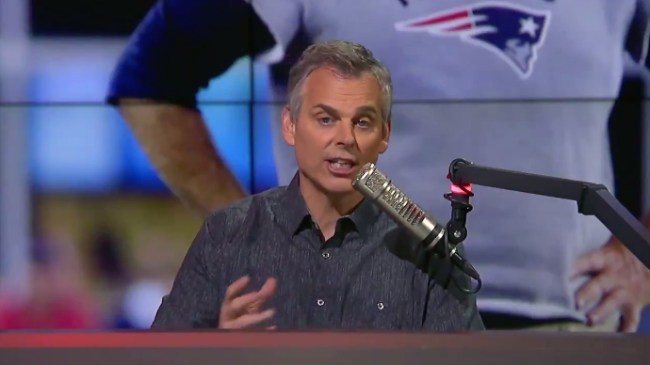 Colin Cowherd is also the dude who recently said that Tiger Woods is so far ahead of Michael Jordan in terms of influence that if it were a golf tournament, Jordan would be 15 strokes behind. Or that time he called John Wall’s intelligence and leadership into question after he did the Dougie before a game. Or when he pissed off the entire Dominican Republic when he said that baseball is easy because Dominicans can play it.

Still, Cowherd is making north of $6 million annually for his opinions on Fox Sports, and they are now bordering on conspiracy theories.

In the wake of Bill Belichick and the Patriots letting go of five offensive talents in Brandin Cooks, Nate Solder, Danny Amendola, Dion Lewis and Cameron Fleming this offseason, Cowherd suggested that Belichick was trying weaken his team to prove a point to Pats owner Robert Kraft. Cowherd is suggesting that one of the most winning-obsessive coaches of all time would throw the baby out with the bath water. He is operating under the assumption that the Jimmy Garoppolo trade split them apart ideologically.

"Five key offensive players have all been allowed to walk out the door… I'm supposed to believe it's a coincidence?" @ColinCowherd explains the message Bill Belichick is sending this offseason pic.twitter.com/RQK1LnGYZy

“Five key offensive players have all been allowed to walk out the door. So that means Tom Brady goes into this year, at 40, with his two best offensive pieces, 32-year-old Julian Edelman off an ACL surgery, and the not physically-reliable Gronk. If one of them gets hurt, Tom Brady has never had a football team where he will have to pull it more than this year. Sacked more, pressured more, less home runs on the deep ball, less of a running game.

“What does it mean? Colin, what are you saying? I’m supposed to believe that it is a coincidence that his best running back, his left tackle, his best slot receiver, his best deep threat, his right tackle? Bye bye. Gosh, wish we could’ve kept you.

“You know what that is? In one year, Brady’s numbers are going down, and Belichick is going to go to Bob Kraft and say ‘We’re finally seeing his age, ’cause Tom’s been fooling us with age.’”

Yo Colin, who’s your dealer? Tell him to hit me up.