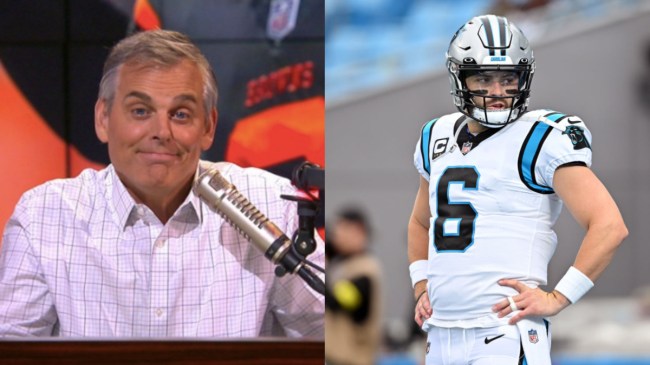 Here’s a little inside baseball, peek-behind-Oz’s-curtain for ya: given how much the sports world seems to love to hate on Baker Mayfield, I’ll often Google the quarterback’s name to see if there’s anything worth writing about.

And this morning, for example, I noticed that virtually every article on Google News (including one that I myself had written a few days ago) had come to the same conclusion: Baker Mayfield’s days as the Panthers’ starting quarterback are already numbered.

RELATED: Panthers ‘Source’ Reminds NFL World That Sam Darnold Is Out ‘For A While’ As Patience With Baker Mayfield Has Already Evaporated

One quote from notorious sports media talking head Colin Cowherd caught my eye in particular, though, as the 59-year-old radio host suggested that Mayfield should walk away from the game to become a broadcaster.

“If I owned a network, I’d put Baker on as a college football announcer tomorrow,” Cowherd said after co-host Jason McIntyre pondered whether Mayfield might choose broadcasting over being a backup in the NFL. “Absolutely. Tomorrow! Now he’s not [Joel] Klatt or [Kirk] Herbstreit, but I would put him on a college game. He’s got huge credibility collegiately, he’s totally outspoken.”

“I think Baker Mayfield, tomorrow, as a college football analyst, I think he’d be in the No. 2 booth within two years. He loves Oklahoma football, he has unbelievable passion for it. There’s nothing wrong with that. He doesn’t need the money. He could be a huge star as a broadcaster.” [Awful Announcing via The Herd]

The hole in Cowherd’s hypothetical is that while Mayfield might have an “unbelievable passion” for college/Oklahoma football, the 27-year-old former Heisman Trophy winner likely also has a greater passion for, you know, actually playing football.

Sitting at 1-3, both Mayfield and Panthers head coach Matt Rhule need to get a win on the board, and soon, if they want to save their jobs. The Panthers will take on the San Francisco 49ers in Charolette on Sunday at 4:05 p.m.

RELATED: Colin Cowherd Has A Predictably Square Reaction To The Viral Video Of Trey Lance ‘Making It Rain’