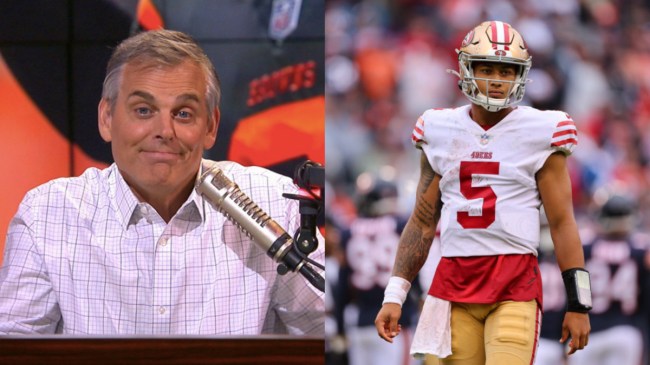 Video of Trey Lance relieving some stress following the San Francisco 49ers’ loss to the Chicago Bears last Sunday has made its way to the internet and has gone massively viral. Given the video’s content, we won’t be posting the video itself, but you can easily find it over on Twitter by simply searching “Trey Lance.”

We will, however, share Colin Cowherd’s reaction to the clip, which created the hilarious circumstance of the 58-year-old radio host saying things like “making it rain at a strip club.”

“Gagging to the Bears, can’t complete 50% of his throws, making it rain at a strip club,” Cowherd said.

The fact is that Trey Lance’s performance during Week 1 had nothing to do with the viral video and everything to do with the uniquely awful conditions he was forced to play through in his FIRST-EVER start. If he struggles against the Seahawks this weekend and for the rest of September, then, perhaps, it’s time to panic.

But right now, this video is nothing more than a young man having his privacy breached while he was just trying to live his life. I can promise you that Lance is neither the first nor the last NFL player to do this sort of thing.